The One That Got Away
By Chris Ryan

Staff member
Alcock ​
John ​
1 SAS (B Squadron) ​
Squadron Sergeant Major ​
2657449 ​
Mention in Despatches,Croix de Guerre,with Silver Star (Fr) ​
Normandy 1944 ​
parent unit Army Air Corps​
former Coldstream Guards​
born 1918​
enlisted Coldstream Guards 1937​
served in 2 SAS,1 SAS and 2 SAS (A Squadron) again 1944 (SQMS + SSM)​
part of the burial party at Moussey​
RSM 3 Parachute Regiment 1956 (Suez)​
Parachute Regiment (TA),Glasgow 1958​
22 S.A.S. 1959-1966​
died 1997​
​
John my fathers career, John Alcock, went like this-​
Joined Coldstream Guards at Sheffield 1936​
with above at Dunkirk 1940 BEF.​
Home to 1943 then Egypt North Africa with Guards joins SAS 1943​
N.Africa 1944 SAS​
Sicily 1943 then Italy landed at Taranto with SAS 22 team as advnce guard of main landings by paras by boat.​
About this time I have a post card he sent to my mother from an American hospital in Sicily-malaria.​
1944 back in UK with SAS to Scotland​
1944 Operation Pistol in Alsace Lorraine SAS​
Home 1944 to 1945 SAS​
C.M.F 1945 SAS​
Home 1945 SAS​
France,Norway,Germany 1945 SAS​
Home 1949 Army reserve 21 SAS artist rifles.​
Rejoined the Colours Brigade of Guards.​
Posted to Jamaica as RSM Guards to organise the trooping of the colour for Churchills visit and later the Queens. He can be seen on a colonial film with Churchill.​
Home 1954​
RSM 3 Para 1956 Cyprus and Suez drop. November the 5th 1956.​
Posted to 16th Scottish TA parachute regiment-Farra Hockley was his CO here.​
Re-joins 22 SAS we live on the base at Hereford -he goes to Fort Bragg America with 22 SAS for training - Aden - Malaya - and Boeneo/Sarawak.​
Leaves army in 1965/66 Returns to his routes in Yorkshire.​
Worked for the East Riding Education Service and finally retired at the age of 65.​
Mentioned in Despatches and Awarded the Croixe de Guerre by General Konige of Paris.​
Dad knew the following men and visted them in his old age - Harry Vickers, Jack Paley, Jack Rookes and probably others I don't know of. He knew a man called Reg Waddington from Huddersfield. They are all dead now. What a generation. ​
​
IMAGES:​ 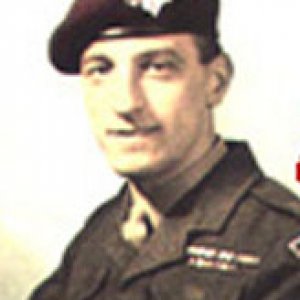 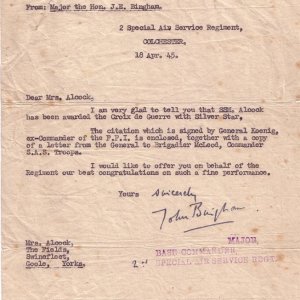 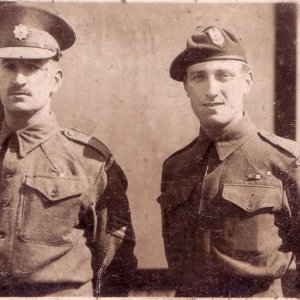 The picture above in the Parachute beret was taken around the time he was RSM of 3 Para. He took part in the Suez Canal parachute drop at El Gamil. This was the last major airbourne assualt.
G

Some of the dates above are incorrect. He as posted to the Scottish TA parachute battalion (16th) in 1958 and then left there for 22 SAS at Hereford which he left in 1966 to return to Yorkshire. There followd a period of re-adjustment to civiklian life. His guards training meant he was always smart. he made efforts to contact ex-SAS from the war time period and made friends with Jack Rooks and Harry Vickers who have sadly gone now.
G

John Alcock (known as Jack to his friends) was born in Goole Yorkshire. his father was a riveter at Goole shipyards. He left schoolat 14 and became a butchers boy. When he had gained a few years he enlisted in the Coldstreat Guards with the intention of becoming a policeman later on. But the war arrived. He went to france and later was part of the guards retreat to Dunkirk. On this retreat he led his section out of some woods and came across his brother who was also a Coldstreamer. His brother charles was serving food to the retreating guardsman. They briefly exchanged words and the momnet was gone. Charles got back to the UK via Liverpool, but he had no recollection of the trip as he had been wounded and knocked out with morphine for the entire trip home. My father, John Alcock, got back but nearly missed the boat as he had vouentered to help carry some wounded from an ambulance. He was sent to wakefield in order to regroup and reform. My mother cycled from Goole to Wakefield to see him.
G

RSM J Alcock spent three years in Jamiaca as rsm to the jamaica battalion. the approx dates were 1951 to 1954.
G

lasat week I recieved a reply to an enquiery to the american military archives in Maryland. I was sent a short record of my fathers debriefing by the G2 officer of the American fourth armored division in 1944 when dad had just crossed the line in alsace lorraine onto the american side. Interestingly it gives the name of joseph Lyczak as Joseph Grand-to hide his polish identidy no doubt.
G

I have a menu of the 2 SAS 1943 Boxing Day menu for the Sgts Mess in Africa (presumably Philippeville) which appears to have been signed by your father along with many more, including Jack Rooks and Reg Waddington who you mention above. It belonged to my father who spoke on numerous occassions about Jack Rooks and Harry Vickers amonst others. It's mostly signed in pencil but if it would be of interest I can try to scan or photograph it and let you have a copy. Let me know.

I don't suppose that the signature on the bottom right-hand side is that of Lt Col BINGHAM, and the sketches are all hand drawn, mostly of ALE, ALE and more ALE!
I have one which is actually from the 19th Bn Essex Regt lunch for Christmas 1943, again in North Africa!
G

No I'm afraid not. It is hand drawn and presumably copied in some way but it's definitely 2 SAS and doesn't have the signature of Lt Col Bingham on it.
G

Hello. thanks for the menu-its priceless. Are you the Robinson called Geronimo?
Graham Alcock
G

Hello
Glad you like it - let be know if you manage to work out any of the names.
No I'm not Geronimo I'm afraid - must be a different Robinson.
Regards
Graham
G

Jack Alcock won the Croix de Guerre with Silver Star. There were only seven of this grade of medal awarded to the SAS in WW2.
The others were won by,
Wisemen, Holland, Good, Charles Moore, Almonds and ....... who was the seventh man - Paddy Mayne was not the man?
G

SQMS John Alcock was awarded the Croix de Guerre at Silver Star level. Only eleven were won at this level by the SAS.
G

Since I last added comments here about my father's mission during Operation Pistol I have found out some new facts concerning his mission. When he blew the small troop train up two German officers were killed in the explosion. He never knew this. I found it out as recently as 2015 from local people. The Gestapo had originally suspected the train had been derailed by a local man who had been denounced. This wrong accusation allowed my father the time to get away from the explosion site.
G

Hello Graham,
Thank you again for the SAS Menu from Boxing Day. I sent a copy to the association. Which county do you live in - i am in Yorkshire.
Graham Alcock
G

galcock said:
Hello Graham,
Thank you again for the SAS Menu from Boxing Day. I sent a copy to the association. Which county do you live in - i am in Yorkshire.
Graham Alcock
Click to expand...

I live in Norfolk but, like my father, was born in Berkshire.