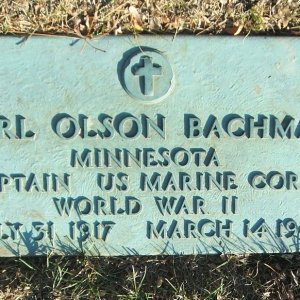 Silver Star : The President of the United States of America takes pride in presenting the Silver Star (Posthumously) to Captain Carl O. Bachman (MCSN: 0-13832), United States Marine Corps Reserve, for conspicuous gallantry and intrepidity as Commanding Officer of Company H attached to the Third Battalion, Twenty-Eighth Marines, FIFTH Marine Division, in action against enemy Japanese forces on Iwo Jima, Volcano Islands, on 23 February 1945. Undaunted after five days of bitter fighting, Captain Bachman rallied his tired and depleted troops when ordered to flank the battalion to the beach and, establishing himself on the front lines with his men, encouraged and directed them during the fanatic infiltration attack launched during the night by the enemy with hand grenades and knives, personally engaging in fierce grenade duels until the Japanese assault was repulsed and heavy casualties inflicted on the enemy. By his indomitable spirit and coolness in the face of extreme danger, Captain Bachman inspired confidence in his men and prevented a serious break-through which would have been disastrous to vital units at the rear. His superb leadership and unwavering devotion to duty throughout the bitter hostilities contributed essentially to the defense of his sector and were in keeping with the highest traditions of the United States Naval Service.