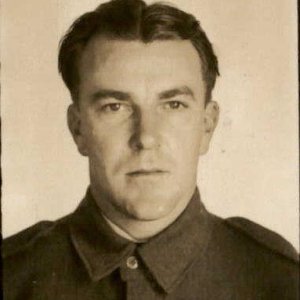 Distinguished Conduct Medal : W.O.II BARRETT was taken prisoner at NAVPLION on 28.4.41 and marched to a P/W camp nearby where they stayed eight days. Conditions were appalling: P/W were practically without food, and any sort of shelter or blankets.

On 6.5.41 he was moved to CORINTH P/W camp where he remained roughly six weeks. Conditions were little better and German discipline was very severe. They were hit with belts or rifle butts at the slightest provocation.

On June 26th W.O.II BARRETT was moved to SALONIKA by train, though they had to walk 25 miles between LEVADIA and LAMIA where there was a break in the line.

They remained at SALONIKA P/W Camp till the 9th July. Here conditions were the worst they had struck.

On 6th July W.O.II BARRETT escaped by slipping through barbed wire. He was recaptured after half an hour as he ran into a German patrol, and received a blow on the back for punishment.

On 9th July he was taken by train to GERMANY with two thousand other Australians.

After three days they arrived at a town in AUSTRA. There was no station and it was dark when they arrived so W.O.II BARRETT did not know the name of the town.

They changed trains here, and in the process W.O.II BARRETT jumped into the brake van of a slow moving train going in the opposite direction. After being in this train for 25 hours he arrived at BELGRADE.

At 2100 hours the train pulled up in the Southern suburbs of BELGRADE. He got out, made for a small cluster of houses, knocked at a door and was received with open arms. He spent four days with these people, was given food and civilian clothes, then they took him to another family where they could speak English.

He spent fifteen days with these people and was able to wander freely over BELGRADE with them, noting conditions and the results of German occupation.

He was also preparing his escape, and was eventually taken to the railway marshalling yards, where he got into a truck under a tarpaulin and so returned to GREECE.

He left the train at POLYCASTRA, there contacted Greeks who took him to MICROVASAS where he spent fourteen days. Here he met Pte. J. REID (who has also been recommended for recognition) and an Australian.

They wandered about the MACROVASAS district together dressed as Greek civilians, till about 26th August, when they made their way to SALONIKA, escorted by a Greek who had the address of a Cypriot woman who was going to put them on a British submarine. The day previous to their arrival in SALONIKA this woman was captured by the Germans and the plan fell through.

They then started to walk to the Turkish border and managed to cross GREECE to ALEXANDROUPOLIS. They met Bulgarian troops on the way. They were young - 19 or 20. At ALEXANDROUPOLIS they tried to cross into TURKEY, but found too many Bulgarians garrisoned in the town, so took a train to KAVALIA.

They then tried to get a boat across to TURKEY but were unsuccessful and returned to ATHOS Peninsula. On the way they passed through the town of STAVROS where, civilians told them, there were 800 Germans. There was another battalion at LANGADAZ.

They walked down the ATHOS Peninsula as far as LAVRA. The Greeks were very good to them and they had no difficulty obtaining food.

They met four other Australians, and after obtaining a small boat, sailed for TURKEY.

The wind veered, however, and they arrived back three miles South of LAVRA. Here they met a Greek policeman who offered them a passage to TURKEY for £5 sterling.

They reached IMBROS on 12th September, from whence the Turkish Authorities took them to CANAKKALE, where the British Consul took charge of them.

This N.C.O. not only escaped twice, but the second time did an extraordinarily fine performance. He endured great hardships - first in P/W camps, subsequently on his wanderings - but remained undaunted, even when plans fell through and he was faced with another long journey to find a way to British territory. He collected stray escapers on his way and showed great courage in guiding them through districts known to be full of Germans. He brought back interesting information about enemy activities.