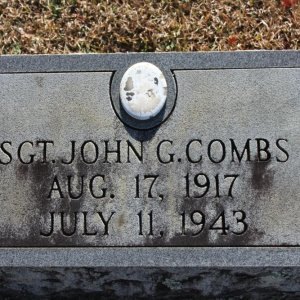 Silver Star : The President of the United States of America, authorized by Act of Congress July 9, 1918, takes pride in presenting the Silver Star (Army Award) (Posthumously) to Platoon Sergeant John G. Combs (MCSN: 259087), United States Marine Corps, for gallantry in action while serving with Company C, 1st Marine Raider Battalion, at ***, ***, Solomon Islands on 11 July 1943. When the officer in charge of a mopping up patrol was wounded, Sergeant Combs assumed command and without interruption continued a skillful attack on an enemy position. Concerned only with the successful accomplishment of the mission, Sergeant Combs crawled close enough to throw a hand grenade into the Japanese position. He was killed when his bold action immediately drew fire from another enemy weapon.