Staff member
Gamble ​
Geoffrey Lee ​
138 Squadron (RAF) ​
Flight Sergeant ​
611917 ​
Distinguished Flying Medal ​
1944 ​
flight engineer​
149 Squadron 1945 (Flying Officer 54279)​
DFC (London Gazette 25.5.1945​
​
information courtesy of Thomas Lee (2nd cousin)​
​
Geoffrey Gamble DFC,DFM​
​
Geoffrey was the son of Tom Gamble and Edith Lee.​
​
He was born in 1920. During WW II he was a Flight Engineer in Bomber Command, initially with 138 Squadron based at Tempsford, nr Sandy, Bedfordshire. Here he flew in the Handley-Page Halifax heavy bomber. This squadron was one of the two Special Duty Squadrons, the other being 161 Squadron, also based at Tempsford, flying Lysanders, Ansons and Hudsons. 138 Squadron dropped agents and materiel by parachute to the various resistance organisations in France, Norway, Holland, Denmark & Belgium (and later on further afield in the Balkans) whilst 161 provided a "taxi service" for agents, landing into and out of occupied Europe to deliver and collect them. As this was only possible when there was sufficient moonlight, the 2 squadrons were restricted to flying for the period on either side of the full moon, hence their nick-name, the "Moon Squadrons". Between May 1943 and January 1944, as a Flight Sergeant, he flew 38 ops., 8 more than a normal full tour of 30 operations, his tour having been extended because of "exigencies of the Service".​
​
After completing his full tour of 30+ operations he was transferred to the Operational Training Unit at RAF Feltwell in Norfolk as an instructor on Avro Lancasters, an administrative bloomer as he had never flown in one!! However, he took up the challenge and succeeded in his new role. In August 1944 he was gazetted for the D.F.M. (Distinguished Flying Medal) for his time at 138 Squadron and later that month he was promoted to Pilot Officer, backdated 5 months. This meant that the following month he was automatically promoted to Flying Officer.​
​
However, the training role was not for him and in October 1944 he persuaded the authorities to return him to active flying duties at RAF Methwold, flying as Flight Engineer in Lancasters. This was not without incident. On one occasion in November, whilst over the target at Hamburg on a daylight raid, a 250lb bomb, dropped against regulations by an aircraft directly above them, passed straight through their rear fuselage without exploding whilst other bombs, including a 4,000lb "cookie" just missed them. The following month, with a full load of fuel and bombs, they were struck by lightning just after take-off, the flash being so great that those on the ground thought that the aircraft had exploded in mid-air. All the electrics being burnt out, they were instructed to jettison their bombs over the Wash and return to base. Probably his hairiest op. was on 21st December 1944 on a daylight raid to Witten when their Mustang fighter escort was lured away leaving the bombers at the mercy of other German fighters lying in ambush. His aircraft was attacked by 2 fighters but luckily they did not press home their attack. The Lancaster was able to bomb the target and they made good their escape with only a few holes to show for it. Of this incident he commented that if the fighters had kept them as their target they would have been brought down! Despite these mishaps, between 6th October and 27th December 1944 he flew a further 20 ops. before he was taken off the front line. On 25th May, 1945 he was gazetted for the D.F.C. (Distinguished Flying Cross).​
​
With the odds of surviving a full tour in Bomber Command being so abysmally small, he put his survival down to 90% Good Luck and 10% Skill.​
​
He died in 2004.​ 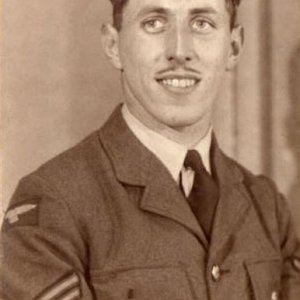 We Landed by Moonlight: Secret Raf Landings in France 1940-1944
By Hugh Verity
A

I believe this may be my Father (parents separated when I was a child} Does anyone know of any living relatives?
D

Geoffrey Lee Gamble was a second cousin. Sadly he died in 2004 before I ever met him. I correspond frequently with his first cousin who lives in Essex and I believe that his sister is still alive.

If you can provide me with anything to connect you with Geoffrey I will be more than happy to pass it onto his relatives and if you are "one of us" we will be delighted to welcome you into the fold. It will probably be easiest if you use my e-mail address for contact - "doclee@cwgsy.net"