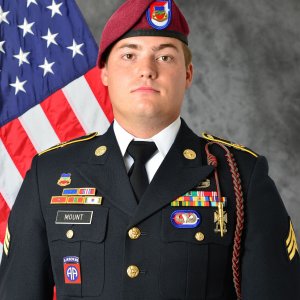 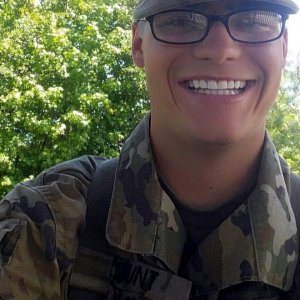 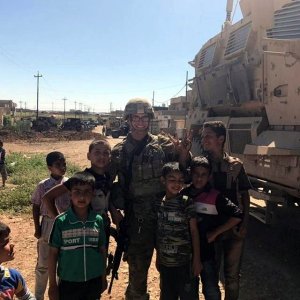 ​
SGT Bryan Cooper Mount, beloved husband, son, brother, and dog father passed away from injuries sustained while conducting combat operations in Northeast Syria on 21 JULY 2020. Cooper was born in St. George UT on May 24th, 1995 to Bryan and Bronwyn Mount. He was the 2nd of two children.​
​
Cooper grew up in Parowan, Utah and was an extremely happy, playful, and rambunctious kid. During his youth he was a Brown Belt in Karate, loved to go skiing with his older brother and friends, and was outside playing whenever he could. Cooper was fearless and always the first and most willing to try anything. During high school Cooper was able to be a member of a state championship cross country team while also participating in many other school opportunities and constantly being involved and loved by all.​
​
After high school, Cooper went to work for In-N-Out Burger where he eventually became the Fry Guy. While working at In-N-Out, Cooper met the love of his life Michell. After dating and working together for a year, Cooper and Michell were wed at a ceremony in St. George, UT on October 24th, 2015. Shortly following their marriage, Cooper enlisted in the United States Army as a Cavalry Scout, 19D.​
​
Cooper travelled to Fort Benning, GA where he completed his initial training as well as Airborne school. Following his completion of Airborne, Cooper was stationed at Fort Bragg, NC as a member of the illustrious 82nd Airborne Division. Accompanied by Michell, Cooper grew tremendously and was quickly advanced to the rank of Sergeant following a combat tour to Mosul, Iraq in 2017. After returning home Cooper was making plans for his life outside the Army and wanted to be a barber and one day open a food truck. Returning to Northern Iraq and Syria in 2020, Cooper served as a gunner protecting the paratroopers under his leadership, beloved by everyone in military who knew him.​
​
Cooper was the most endearing, happy, kind, non-judgmental, and weird person to be in the Army and everyone loved him. He was always there to do the right thing, all while providing humor and excellently timed jokes to lighten situations. He served his country with honor and pride, but more importantly he was a passionate husband, friend, son, and brother who was always willing to be there and help no matter what the cost. Cooper is survived by his wife Michell, his dogs Ben and Scooter, his mother Bronwyn, his father Bryan, his brother Dillon, his grandparents Burke and Darlene, and his Aunt Cheryl.​