Staff member
VanEvery ​
Gilbert ​
506 Parachute Infantry Regiment (Company D) ​
Private First Class ​
39831209​
Distinguished Service Cross ​
Belgium 1944-45 ​
Born 22.09.1921 Burley, Idaho​
Died 02.07.1987 Atomic City, Idaho​
Buried Riverside Thomas Cemetery, Blackfoot, Idaho​
​
The President of the United States of America, authorized by Act of Congress, July 9, 1918, takes pleasure in presenting the Distinguished Service Cross to Private First Class Gilbert Van Every (ASN: 39831209), United States Army, for extraordinary heroism in connection with military operations against an armed enemy while serving with Company D, 2d Battalion, 506th Parachute Infantry Regiment, 101st Airborne Division, in action against enemy forces on 20 December 1944. On that date, during fierce action near Bastogne, Belgium, Private First Class Van Every's platoon of the 506th Parachute Infantry was pinned down by strong enemy forces. Courageously moving his light machine-gun to a position in front of his platoon, Private First Class Van Every delivered a deadly stream of fire which disorganized the enemy attack and permitted his companions to establish firing positions. Then, against repeated counterattacks and although the focus for concentrated fire, he held his exposed position and with skillful, deadly fire inflicted tremendous losses upon the enemy. The fearless determination Private First Class Van Every displayed and his courageous, heroic devotion to duty exemplify the highest traditions of the military service. ​
​ 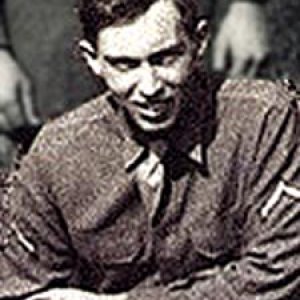 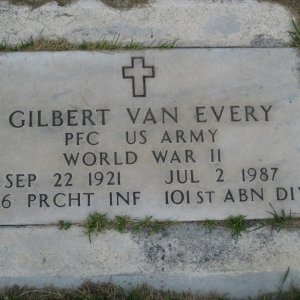 Gilbert N. Van Every (22 September 1921 in Burley, Idaho - 2 July 1987 in Atomic City, Idaho) was a American Private First Class in the United States Army during World War II. He also was a recipient of the Distinguished Service Cross which was awarded for having distinguished himself by...