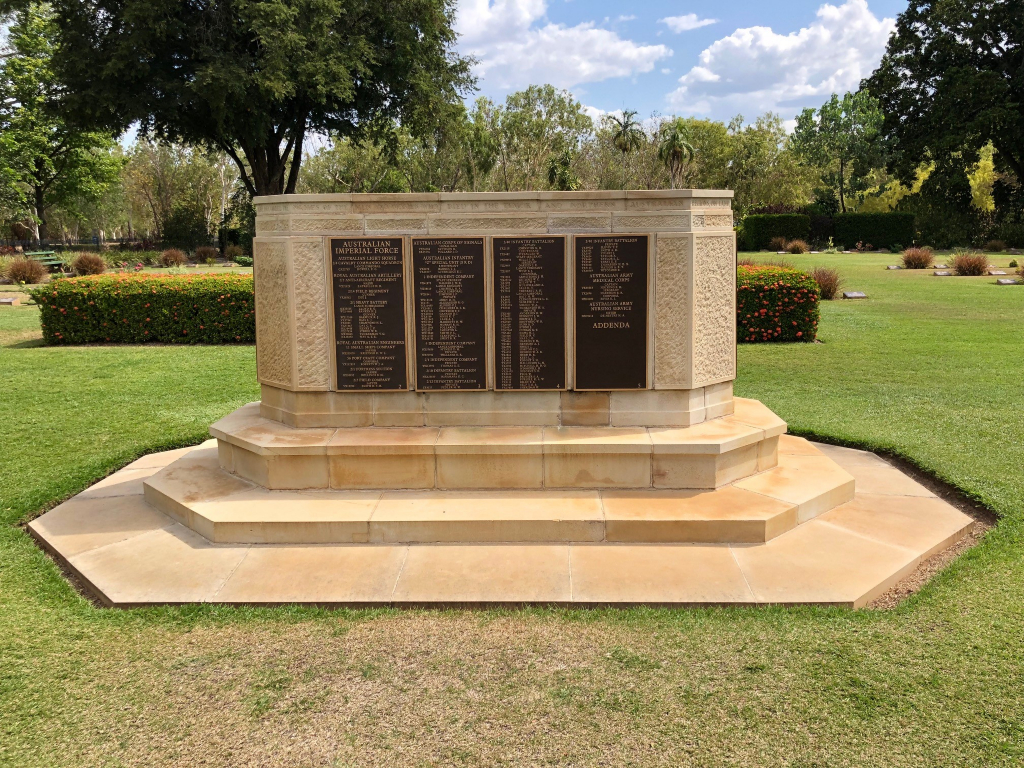 HISTORY INFORMATION
This is one of several memorials erected to commemorate the men of the Australian Army, the Royal Australian Air Force and the Australian Merchant Navy who lost their lives in the south-west Pacific region during the 1939-1945 War and have no known grave.

The Northern Territory Memorial commemorates 290 members of the Australian Army, the Royal Australian Air Force, the Australian Merchant Navy and the Services Reconnaissance Department who lost their lives in operations in the Timor and Northern Australian regions and in waters adjacent to Australia north of Latitude 20 South, and who have no known grave (Men of the Royal Australian Navy lost in this area who have no known grave are commemorated on the Plymouth Naval Memorial in England, along with many of their comrades of the Royal Navy and of other Commonwealth naval forces).

Northern Territory, Australia, contained during the war the largest operational base in the south-west Pacific. Darwin, the capital, was heavily bombed in 1942 and within a month of the first air raid became the heart of this important base. From its airfields the Royal Australian Air Force raided Timor, Dutch New Guinea, Borneo and the islands in the Arafura Sea; and it was from Darwin that the Services Reconnaissance Department moved by aeroplane, flying-boat or submarine to their operational areas.

Timor, 450 miles from the north-western coast of the continent and of vital strategic importance, was the scene of a gallant resistance put up against overwhelming odds by "Sparrow Force", a small body of Australian troops sent there early in December 1941 to assist the Dutch in holding the island. Sparrow Force joined a contingent of the Dutch forces and a formation of the Royal Australian Air Force at Koepang, on the south-western tip of the island where lay the Dutch aerodrome and radio station. The Japanese struck the first blow a heavy air raid on the Koepang aerodrome on January 26th 1942. This was followed by blows at keypoints in both Dutch and Portuguese Timor, prior to the landing of the Japanese troops. On the initial violation of Portuguese neutrality an Australian Independent Company (a Commando force) was detached from the main Australian body and with Dutch East Indian troops left Koepang for Portuguese Timor.

There they tried to organise some sort of defence of Dilli, the capital, with the object of denying the Japanese the use of its aerodrome and other facilities. Then came simultaneous air attacks on Koepang and Dilli, and at the same time Japanese carrier based bombers and planes from Amboina blasted Darwin, effectively preventing the despatch of reinforcements to Timor. Faced by odds of twenty to one the small force held out, inflicting heavy casualties on the enemy, until at last the main body at Koepang was compelled to capitulate on February 23rd 1942.

Remnants of the force made their way into Portuguese Timor and linked up with the Australian Independent Company operating in the Dilli region. When this place in turn was over-run by the enemy this small party put up a terrific resistance, one group of 20 Australians holding up 500 Japanese for six hours. Finally, having destroyed the aerodrome, the Australian Independent Company together with a Dutch Guerilla force withdrew to the wild, heavily timbered mountains of Fronteira province. There they began a historic and most successful guerilla campaign which lasted until they were evacuated early in 1943.
Recent contents
Top