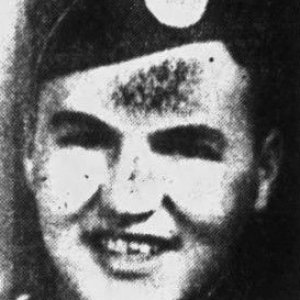 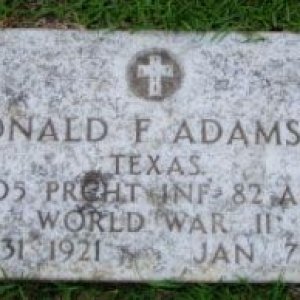 Silver Star : The President of the United States of America, authorized by Act of Congress July 9, 1918, takes pleasure in presenting the Silver Star to Corporal Ronald F. Adams, Sr. (ASN: 18109222), United States Army, for gallantry in action while serving with Headquarters Company, 2d Battalion, 505th Parachute Infantry Regiment, 82d Airborne Division, in action against the enemy on 19 September 1944 at ****, Holland. Corporal Adams, a machine gunner, attached to a rifle company during the assault on a fortified position at ****, moved into town in the dead of night and did not realized that he was in the middle of an enemy group already in the area. The enemy found his position and immediately opened fire on him. Unable to employ his machine gun to fire in the enemy dugout, Corporal Adams fixed his bayonet and assaulted the enemy positions. He killed one of them and captured four others. He attempted to move his prisoners back to the platoon CP and was seriously wounded by sniper fire, but despite his wounds he reported his prisoners to his platoon leader and was then evacuated. By cool determination Corporal Adams had successfully accomplished his mission and made a large contribution to the success of the entire battalion missions. His gallant actions and dedicated devotion to duty, without regard for his own life, were in keeping with the highest traditions of military service and reflect great credit upon himself and the United States Army.

Silver Star (Bronze Oak Leaf Cluster) : The President of the United States of America, authorized by Act of Congress July 9, 1918, takes pride in presenting a Bronze Oak Leaf Cluster in lieu of a Second Award of the Silver Star (Posthumously) to Corporal Ronald F. Adams, Sr. (ASN: 18109222), United States Army, for gallantry in action while serving with Headquarters Company, 2d Battalion, 505th Parachute Infantry Regiment, 82d Airborne Division, in action on 8 January 1945, near *****, Belgium. Corporal Adams, Squad Leader, was assigned the mission of protecting the right rear flank of the assault company. Leading his Squad, and firing his machine gun, Corporal Adams came under extremely heavy enemy automatic weapons fire. Continuing to push forward, Corporal Adams was wounded and fell to the ground. Raising on one knee, he continued to fire his weapon until an enemy strong point was neutralized. Still crawling towards the enemy, Corporal Adams died from the wounds he received. His courage and personal sacrifice reflects great credit upon himself, and upon the Airborne Forces.

Deliver Us From Darkness: The Untold Story Of Third Battalion 506 Parachute Infantry Regiment During Market Garden
By Ian Gardner