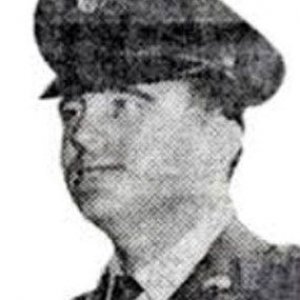 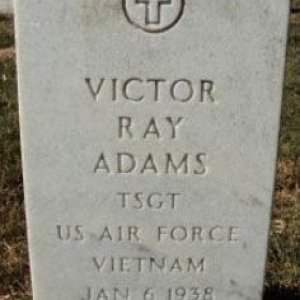 Air Force Cross : The President of the United States of America, authorized by Title 10, Section 8742, United States Code, takes pleasure in presenting the Air Force Cross to Technical Sergeant Victor R. Adams (AFSN: 13533712), United States Air Force, for extraordinary heroism in military operations against an opposing armed force while serving as a UH-1F Helicopter Aerial Gunner of the 20th Special Operations Squadron, Nha Trang Air Base, Vietnam, in action near Duc Co, Republic of Vietnam, on the night of 26 - 27 November 1968. On that date, Sergeant Adams' aircraft was shot down by hostile ground fire and crashed in dense jungle. Disregarding his own injuries and the imminence of hostile activity, he assisted the co-pilot from the burning helicopter and returned to rescue the trapped personnel. He succeeded in pulling another man from the wreckage, before the severity of the fire and subsequent explosions forced him to abandon further rescue efforts. Through his superb airmanship, aggressiveness, and extraordinary heroism, in the face of hostile forces, Sergeant Adams reflected the highest credit upon himself and the United States Air Force.

Distinguished Flying Cross : The President of the United States of America, authorized by Act of Congress, July 2, 1926, takes pleasure in presenting the Distinguished Flying Cross to Technical Sergeant Victor R. Adams (AFSN: 13533712), United States Air Force, for heroism while participating in aerial flight as an UH-1F Helicopter Aerial Gunner near Duc Co, Republic of Vietnam on 13 November 1968. On that date, Sergeant Adams rescued a Special Forces Long Range Reconnaissance Patrol which was about to be overrun by a large, heavily armed hostile force. With complete disregard for his personal safety, he stood on the landing skid of his aircraft as it descended through a barrage of hostile ground fire to guide the pilots into a constricted clearing for the rescue and to provide protective firepower for the patrol as it boarded his helicopter. The outstanding heroism and selfless devotion to duty displayed by Sergeant Adams reflect great credit upon himself and the United States Air Force.