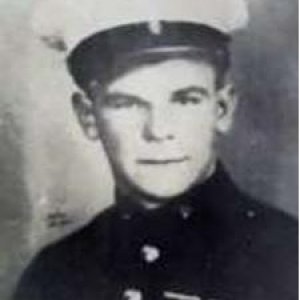 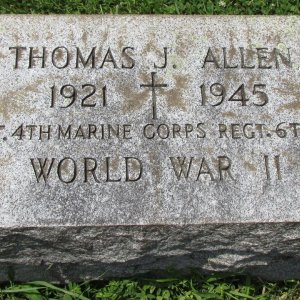 Navy Cross : The President of the United States of America takes pride in presenting the Navy Cross (Posthumously) to Staff Sergeant Thomas Joseph Allen (MCSN: 350828), United States Marine Corps, for extraordinary heroism and devotion to duty while serving with Company C, First Battalion, Fourth Marines, SIXTH Marine Division, in action against enemy Japanese forces on Okinawa, Ryukyu Islands, 23 May 1945. Volunteering to act as an ammunition carrier for a machine-gun squad in his company, Staff Sergeant Allen and three of his comrades sustained wounds when the unit was pinned down by heavy hostile mortar and automatic weapons fire. Deliberately exposing himself to the shattering Japanese concentrations to bring down more effective fire upon the enemy, he staunchly remained in his vulnerable position and, although receiving mortal wounds, continued to deliver covering fire upon the hostile positions until the three casualties had been safely evacuated. By his indomitable fighting spirit and courageous devotion to duty, Staff Sergeant Allen undoubtedly saved the lives of his three comrades and upheld the highest traditions of the United States Naval Service. He gallantly gave his life for his country.