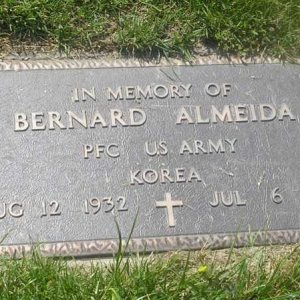 ​
Wed May 9, 2007​
"BRISTOL - Fifty-four years ago, Bernard "Butch"Almeida died on a Korean battlefield. His family never knew that for certain — until the Army came calling two days ago. Initially declared Missing in Action, Mr. Almeida died when the Jeep he was driving in was ripped apart by a mortar."​
​
The Army changed his status to Killed in Action a year after the incident, but according to one of his two surviving relatives, his parents, relatives and friends never knew. Even today, a memorial in his honor at the corner of Hope and Washington streets honors Bernard "Butch" Almeida, Missing in Action.​