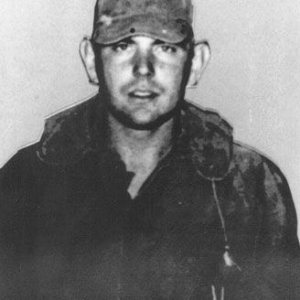 Silver Star : The President of the United States of America, authorized by Act of Congress, July 8, 1918 (amended by act of July 25, 1963), takes pleasure in presenting the Silver Star to Staff Sergeant Robert L. Berry, Jr., United States Air Force, for gallantry in connection with military operations against an opposing armed force in Southeast Asia on 22 April 1966. On that date, Sergeant Berry, flying as a Pararescueman on an HH-3E helicopter, contributed materially to the successful rescue of a downed Air Force pilot despite intense ground fire from hostile troops in the area. With complete disregard for his personal safety, Sergeant Berry provided protective fire cover from the door of the helicopter while assisting in hoisting the injured pilot to safety. He then administered medical aid to the pilot and placed an inflatable splint on his broken leg. By his gallantry and devotion to duty, Sergeant Berry has reflected great credit upon himself and the United States Air Force.
Last edited by a moderator: Mar 2, 2021