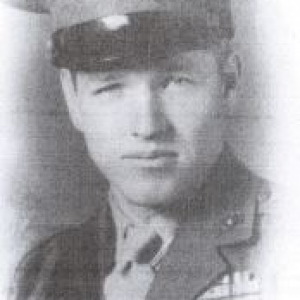 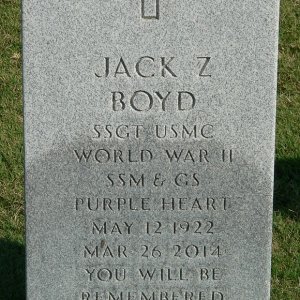 Silver Star : The President of the United States of America takes pleasure in presenting the Silver Star to Sergeant Jack Z. Boyd (MCSN: 285949), United States Marine Corps, for conspicuous gallantry and intrepidity as a member of a reconnaissance patrol of the Third Marine Raider Battalion, Ninth Marines, which was landed by submarine on enemy-held Shortland Islands, Solomon Islands, 23 August 1943. Voluntarily and with utter disregard of personal safety, Sergeant Boyd embarked upon an extremely dangerous mission into Japanese-occupied territory for the purpose of securing vital information with regard to terrain, hydrographic conditions, and strength and disposition of hostile forces. Undeterred by the isolation of his position and by the full knowledge that no assistance could be expected from outside sources, he nevertheless remained on the island for three days, successfully carrying out an important assignment under hazardous conditions where discovery by Japanese troops would undoubtedly have resulted in his capture or death. His courageous devotion to duty was in keeping with the highest traditions of the United States Naval Service.

Silver Star : The President of the United States of America takes pleasure in presenting a Gold Star in lieu of a Second Award of the Silver Star to Platoon Sergeant Jack Z. Boyd (MCSN: 285949), United States Marine Corps, for conspicuous gallantry and intrepidity while serving as a Platoon Sergeant of Company G, Third Battalion, Twenty-eighth Marines, FIFTH Marine Division, in action against enemy Japanese forces during the assault on Iwo Jima, Volcano Islands, on 19 and 21 February 1945. Refusing to seek cover from the intense hostile machine-gun and mortar fire on the beach, Platoon Sergeant Boyd collected his scattered platoon and led them in repeated successful attacks on the well-emplaced enemy, thereby enabling his company to reach its intended objective. Seriously wounded on 21 February, while leading well-executed attacks on four hostile pillboxes deep within the enemy positions, he crawled seventy-five yards to his platoon leader and gave a clear report of the situation before being evacuated. His outstanding courage and devotion to duty were in keeping with the highest traditions of the United States Naval Service.