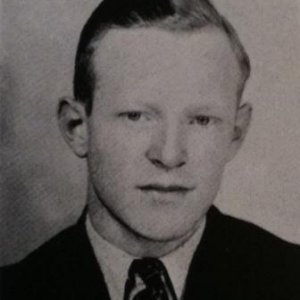 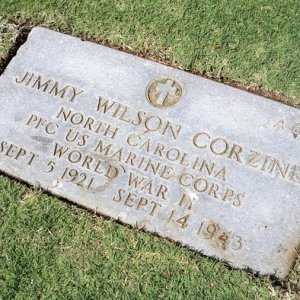 Navy Cross : During action against enemy Japanese forces about one thousand yards south of the Guadalcanal airfield, Solomon Islands, on the night of 13 and 14 September 1942. Working his way forward under intense hostile fire, Private First Class Corzine came upon four Japanese who were moving a machine gun into a position of particular advantage. With courageous determination and complete disregard for his own personal safety, he engaged the enemy single-handed, bayoneting the leader, routing the other three and capturing the machine gun. Turning the weapon upon the fleeing Japanese, he kept it in effective action until the ammunition was expended, then disabled it and with the aid of other men who had come forward to join him, held stubbornly to his advanced position on the face of persistent hostile attacks. His courageous determination, maintained at great personal risk against tremendous odds, contributed materially to the success of our forces and was in keeping with the highest traditions of the United States Naval Service. He gallantly gave up his life in the service of his country.

PFC. JIMMY WILSON CORZINE WAS BORN 5 SEP. 1921 IN CONCORD, NC. FOR HIS ACTIONS AT GUADALCANAL ON THE HILL OVERLOOKING THE AIRFIELD, ON THE NIGHT OF SEP. 13-14, 1942, THE NIGHT IN WHICH HE WAS KILLED, JIMMY WAS AWARDED THE NAVY CROSS.

NOTE: JIMMY WAS BURIED ON GUADALCANAL AND THEN HIS REMAINS WERE LATER MOVED TO THE "PUNCH BOWL" CEMETERY IN 1949 WHEN THE CEMETERY WAS OPENED. A ENGRAVING MISTAKE WAS MADE ON HIS MARKER. FIRST, HE WAS NOT GIVEN RECOGNITION FOR HAVING RECEIVED THE NAVY CROSS AND THE DATE OF HIS DEATH IS LISTED AS 14 SEP 1943. HE WAS KIA IN 1942.
Share:
Facebook Twitter Reddit Pinterest Tumblr WhatsApp Email Share Link
Top