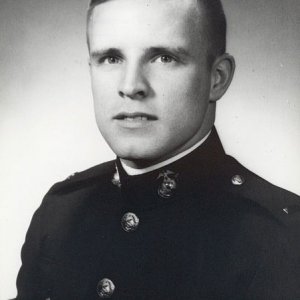 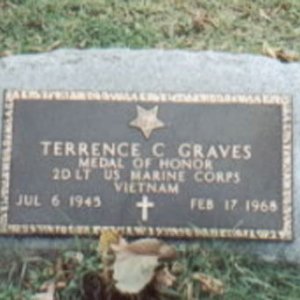 Medal Of Honor : The President of the United States of America, in the name of Congress, takes pride in presenting the Medal of Honor (Posthumously) to Second Lieutenant Terrence Collinson Graves (MCSN: 0-101090), United States Marine Corps, for conspicuous gallantry and intrepidity at the risk of his life above and beyond the call of duty on 16 February 1968, while serving as a platoon commander with the Third Force Reconnaissance Company, Third Reconnaissance Battalion, THIRD Marine Division (Reinforced), Fleet Marine Force, in action against enemy forces in Quang Tri Province, Republic of Vietnam. While on a long-range reconnaissance mission, Second Lieutenant Graves' eight-man patrol observed seven enemy soldiers approaching their position. Reacting instantly, he deployed his men and directed their fire on the approaching enemy. After the fire had ceased, he and two patrol members commenced a search of the area, and suddenly came under a heavy volume of hostile small arms and automatic weapons fire from a numerically superior enemy force. When one of his men was hit by the enemy fire, Second Lieutenant Graves moved through the fire-swept area to his radio and, while directing suppressive fire from his men, requested air support and adjusted a heavy volume of artillery and helicopter gunship fire upon the enemy. After attending the wounded, Second Lieutenant Graves, accompanied by another Marine, moved from his relatively safe position to confirm the results of the earlier engagement. Observing that several of the enemy were still alive, he launched a determined assault, eliminating the remaining enemy troops. He then began moving the patrol to a landing zone for extraction, when the unit again came under intense fire which wounded two more Marines and Second Lieutenant Graves. Refusing medical attention, he once more adjusted air strikes and artillery fire upon the enemy while directing the fire of his men. He led his men to a new landing site into which he skillfully guided the incoming aircraft and boarded his men while remaining exposed to the hostile fire. Realizing that one of the wounded had not embarked, he directed the aircraft to depart and, along with another Marine, moved to the side of the casualty. Confronted with a shortage of ammunition, Second Lieutenant Graves utilized supporting arms and directed fire until a second helicopter arrived. At this point, the volume of enemy fire intensified, hitting the helicopter and causing it to crash shortly after liftoff. All aboard were killed. Second Lieutenant Graves' outstanding courage, superb leadership and indomitable fighting spirit throughout the day were in keeping with the highest traditions of the Marine Corps and the United States Naval Service. He gallantly gave his life for his country.
Last edited by a moderator: Aug 25, 2021