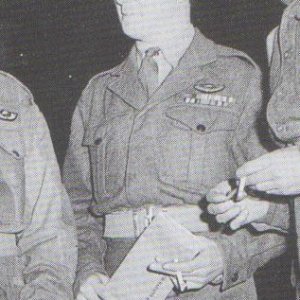 “Anthony Greville-Bell Soldier who cocked a snook at the Nazis and later became a scriptwrite Soldier, scriptwriter, sculptor and amateur musician, Tony Greville-Bell enjoyed an intensely varied life. Yet there was a strong underlying system in all he set about, of which his service in Italy with the 2nd Special Air Service Regiment is a fine example.

As a Sapper officer attached to 2nd SAS commanded by William ‘Bill’ Stirling he took part in Operation Speedwell against railway lines in Northern Italy carrying German re-enforcements and supplies to the front.

Two ‘sticks’ – each of two officers and five NCOs and men – were parachuted into the area near Castiglione, north of La Speziea, on the night of September 7-8, 1943. The commander of the stick of which Greville-Bell was second-in-command dropped wide of the others and was not seen again. Greville-Bell took charge, despite having broken two ribs and damaged his back on landing. He sent Sergeant ‘Tim’ Robinson with two men to cut the Bolgno-Prato railway, which they did, derailing a train in the process.

Greville-Bell spent a day sorting out their explosives and supplies and then set off for the Bologna-Pistoia line. Progress was agonisingly slow. His log for the third day read: “Walked again but in great pain, was finished after two miles. Decided on one more night’s rest and if not able to keep up would send Daniels and Tomasso (his two companions) on without me. “On the fifth day, he noted: “Head now normal. Went on to recce point for demolition.” He chose one on the Bolgna-Pistoia line 150 yards inside a tunnel and blew it with a train inside.

He, Sergeant “Bebe” Daniels and Parachutist Peter Tomasso went on to blow the track and derail a train on the Bologna-Prato line and cut another south of Florence. Fourteen days after their drop, their explosives exhausted, they began their long walk south to join the advancing 8th Army.

Rations were also exhausted but the three foraged for grapes and tomatoes until on the eighteenth day they reached the villa of the Marchese Roberti at Fiesole, overlooking Florence. A sister of the marchese was a friend of Greville-Bell’s family and she sheltered and fed the party for a few days until contact could be made with Italian partisans.

The latter proved less aggressive towards their former German Allies than Greville-Bell hoped – an armistice with Italy had been announced on September 8th – but he stayed until he had gained enough strength to continue south. To mark 28 days in Italy, he and Sergeant Daniels went into Florence and drank some beer in a bar full of German soldiers. On the 30th day he, Daniels and two partisans blew a charge beneath a southbound train north of Incisa.

Their 250-mile march south took the party along the mountain chain. Seventy-three days after their drop, Greville-Bell led Daniels and Tomasso through the German lines to safety. He was awarded the DSO for his outstanding leadership and, in the words of the citation, “unfailing judgement in most difficult circumstances and inspiration to those under his command”.

Anthony Greville-Bell was born in Sydney, the son of Captain W.E.G. Bell, and educated at Blundell’s School, Tiverton. Aged 19 on the outbreak of war, he enlisted and was commissioned into the Royal Engineers. He returned to the SAS after the war when the Malayan Scouts (SAS Regiment) were raised by Michael Calvert (obituary November 28, 1998) in 1950.

Civilian life took him in a variety of directions, including to Sri Lanka where his father had worked as a tea planter before the war. He wrote several screenplays, three of which were made into films: Perfect Friday in 1970, starring Ursula Andress; Theatre of Blood in 1973, starring Vincent Price and Diana Rigg; and The God King, starring Leigh Lawson and Oliver Tobias, in 1975. The last was financed by Dimitri de Grunwald as a joint British and Sri Lanka project and he lived in Colombo with his third wife during the filming.

Sculpture had been an interest since his schooldays, and he returned to it on a commercial basis in the late 1980s. His work featured nude female torsos, children’s heads and birds. His bronze of a wounded soldier being helped to safety by a comrade, mounted on Portland stone, stands in the SAS Garden of Remembrance.

His musical interest began with the flute, initially played as a hobby, but he then formed his own amateur orchestra so that he could play with others. Known as the Learning Orchestra and often performing in St Cyprian’s NW1, this began ten instrumentalists but had reached almost 60 at the time of his death.

He was married four times: to Diana Carnegie in 1945, Helen Scott-Duff in 1955, Ann Kennerley in 1972, the three marriages dissolved, and to Lauriance Rogier in 1996. He is survived by her, by two daughters of his first marriage and one from an earlier relationship.