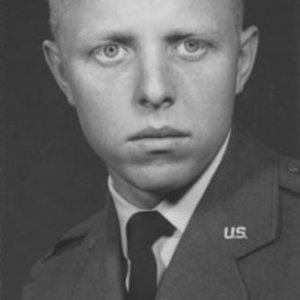 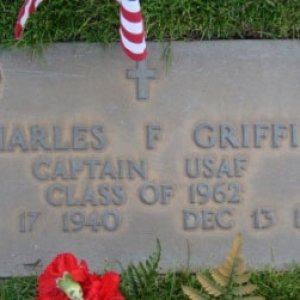 ​
Capt Griffin, Charles Farrell - 13 December 1968​
​
OV-10A 67-14627 19 TASS, 504 TASG, LJSAF, Bien Hoa​
​
Capt Charles Farrell Griffin (KIA)​
Capt Bruce Briant Greene (KIA)​
​
By a strange coincidence, another mid-air collision resulted in the loss of two more USAF aircraft at the opposite end of Indochina on the night of the 13th.​
​
A Viet Cong night attack on an outpost six miles southeast of Truc Giang in the Mekong Delta resulted in the scramble of a number of aircraft from Bien Hoa. An AC-47 was directed to the target and started to drop flares to assist the defenders as it orbited at 3,500 feet. The crew of the Dakota felt a bump and the aircraft became difficult to control. The aircraft had been hit by an OV-10 FAC that was coordinat?ing the aircraft in the vicinity of the target. Both aircraft headed back towards Bien Hoa but the OV-10 crashed northwest of Saigon killing both the crew. The AC-47 gunship eventually landed at Bien Boa but its undercarriage collapsed and the air?craft was so badly damaged that it was scrapped. This was the only aircraft lost by the 3rd SOS during its 17 month existence in Vietnam.​
***********************************​
GRIFFIN, Charles F.​
Class of 1962​
​
Captain Griffin was killed in action on 13 December 1968 as an OV-10 spotter plane pilot when his plane crashed and caught on fire as he was pulling off his target in the Hau Nghia Province of South Vietnam. He was on an operational/forward air controller mission and a member of the 19th Tactical Air Support Squadron at the time. Griffin was known for his courage, dedication to duty, and high quality character, and he significantly contributed to the success of American armed forces in Southeast Asia, having flown over 70 combat missions over South Vietnam. His military decorations include the Air Medal and the Armed Forces Expeditionary Medal. He attended AGOS (1968), SOS (1964), ICAF (1968), and earned 20 hours towards his Masters at Northern Michigan University (1964-8). He has also served as a KC-135 copilot. As a cadet, he served as flight commander, squadron operation officer, and squadron supply officer. He held the rank of Cadet Major and made the Dean's List four semesters. In high school, he graduated 5th in his class of 450, was a member of the Honor Society, and made 3rd in State Track in the 880 yd run in 1957. His memorial fund contributed to the USAFA War Memorial, where his name was placed for his sacrifice for and dedication to this country. ​