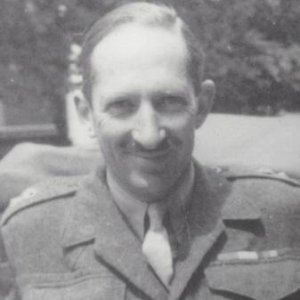 On 8 Feb Major Lindsay was commanding the Battalion which had been given the difficult task of clearing a strongly held thickly wooded area WEST of the REICHS WALD. The area was known to hold well constructed defences with a liberal quantity of mines.

After the initial stage had been carried out successfully, partly due to his very careful planning, the leading companies started to meet serious opposition and through casualties and the awkward terrain, found it difficult to carry on to objectives.

Major Lindsay quickly realising this went forward and by his personality and example gave renewed vitality to the attack, part of which was carried out successfully: the other part the chief part which was to clear a strong point on the Main Corps Axis, was however not meeting with much success the Coy Comd and two officers having become casualties. Major Lindsay seeing the situation immediately went forward again and took personal charge of the forward troops until such time as the objectives had been captured. The enemy reactions throughout this operation were intense and the difficulties were doubled in the steep thickly wooded areas by many Schumines which had already caused casualties.

His leadership, complete disregard for his personal safety and the encouragement and example he showed to his troops under heavy and well aimed small arms fire at this time were of a very high order.

Had it not been for his initiative, cheerfulness and determination under very adverse conditions it is doubtful whether his leading companies would have made much progress. As it was his encouragement, personal bravery and quick decisions ensured that success came where failure was imminent. It was due more to his personal efforts and devotion to duty under fire than to any other Battalion was so successful.