The Regiment: 15 Years in the SAS
By Rusty Firmin

Staff member
Opper ​
Leonard M. ​
504 Parachute Infantry Regiment (Company I) ​
Private First Class ​
369690196 ​
Distinguished Service Cross ​
Germany 1945 ​
​
The President of the United States of America, authorized by Act of Congress, July 9, 1918, takes pleasure in presenting the Distinguished Service Cross to Sergeant [then Private First Class] Leonard M. Opper (ASN: 369690196), United States Army, for extraordinary heroism in connection with military operations against an armed enemy while serving as a rifleman with Company I, 3d Battalion, 507th Parachute Infantry Regiment, 17th Airborne Division, in action against enemy forces on 24 March 1945, in Germany. On that date, several men were wounded and the remainder pinned down when the position into which they had jumped came under heavy enemy small arms and machine gun fire from a nearby woods. Sergeant Opper instructed the men with him to care for and assist to cover and then, with complete disregard for his personal safety, he leaped from his shell hole firing his M-1 until he was within 20 yards of the enemy machine gun and then threw a grenade which knocked out the machine gun and killed or wounded the crew. He then captured four of the supporting riflemen and sent several others to flight. When another machine gun opened up on the men on the field, Sergeant Opper silenced it with rifle fire until the wounded men were removed from the battlefield. The intrepidity, fortitude, initiative and loyalty demonstrated by this fearless soldier in the performance of his duty exemplify the highest traditions of the military forces of the United States and reflect great credit upon himself, the 17th Airborne Division, and the United States Army. ​
​ 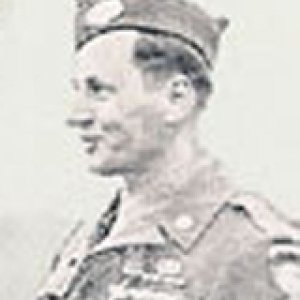