Staff member
Prouty​
Charles Sanford​
U.S.N. Seal Team 1​
Lieutenant Junior Grade​
​
Silver Star​
South Vietnam 1969​
graduated U.S.N. Academy,Annapolis 1967​
5 years as Navy Seal​
2 tours of Vietnam​
FBI (28 years)​
USNR until 1997 (retired as Captain)​
​
The President of the United States of America takes pleasure in presenting the Silver Star to Lieutenant, Junior Grade Charles Sanford Prouty, United States Navy, for conspicuous gallantry and intrepidity in action while serving with SEAL Team Detachment GOLF, MIKE Platoon attached to Commander Task Group 115.7 engaged in armed conflict against North Vietnamese and Viet Cong Communist aggressors in the Republic of Vietnam. On 3 November 1969, Lieutenant, Junior Grade Prouty personally planned, coordinated and led a fifteen-man SEAL heliborne operation deep into enemy controlled territory. The mission was to locate a medical cache and destroy a Viet Cong exchange. The patrol came under heavy enemy fire and was surrounded by two Viet Cong companies. While resisting and fighting off the persistent enemy attack, the patrol located and seized the vast medical cache, and was able to destroy the exchange. On its approach to rescue the patrol, the helicopter came under heavy fire, receiving hits in the main rotor and was forced to return to base. Realizing the crucial situation, he ordered the scrambling of OV-10's and A-37 bombers. While still under heavy enemy fire, he moved to different vantage points directing the gun ships to enemy targets at the same time exposing himself to enemy fire. His direction of the air strikes enabled a second helicopter to facilitate takeoff. Still under heavy fire, a thick cloud cover and a heavy rain storm completely obliterated the patrol's location. Having expended all pyrotechnics with which to mark their location, he accurately directed a gun ship to his location and again exposed himself to heavy fire. The gun ship landed and the patrol was recovered. His calmness in the face of overwhelming odds instilled confidence in his men. Lieutenant, Junior Grade Prouty's bold courage, defiance of danger and devotion to duty under fire prevented the sustaining of a single friendly casualty and were in keeping with the highest traditions of the United States Naval Service.​ 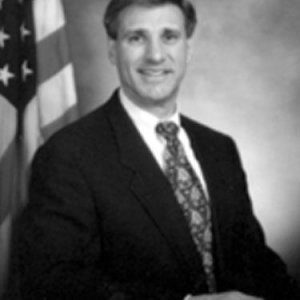