101st Airborne: The Screaming Eagles at Normandy
By Mark A. Bando

Staff member
Seitz ​
Richard Joe (Dick) ​
517 Parachute Infantry Regiment (HQ Company 2 Bn - C.O.) ​
Lieutenant Colonel ​
​
Silver Star,Bronze Star ​
Europe ​
born18.2.1918 Leavenworth,Kansas​
graduated Leavenworth High School 1937 (ROTC)​
attended Kansas State College​
commissioned 1939 (2Lt Infantry)​
38th Infantry Regiment 1940​
503 PIB​
517 PIR (Captain - LtCol) 1943-45​
C.O. Airborne School,Fort Benning 1950-53​
​
Seitz remained in the Army following the World War II. From 1947 to 1949 he served in Japan with the 11th Airborne Division. From January, 1949, he served as the G-3 of the 11th Airborne Division at Ft. Campbell, Ky. In 1950, he graduated from the Command and General Staff College, at Ft. Leavenworth, Ks. He was promoted to colonel in 1954 while serving in Brazil as part of the U.S. Military Assistance Group (Brazil). In the spring of 1957, he received orders to report to Carlisle Barraks, Pa. to attend the Army War College. In June, 1958, upon completion of the War College, he was assigned to the 82nd Airborne Division to command the 503rd Parachute Battle Group at Ft. Bragg, N.C. In June 1959, he became the G-3 for the XVIII Airborne Corps. For a year beginning in June 1960, he was Chief, Field Training Team U.S. Military Assistance Group, Iran. Following six-months at the University of Omaha, beginning in February 1962 he served for a year as Executive Officer, Office of the Deputy Chief of Staff for Personnel, Department of the Army.​
​
Seitz was promoted to brigadier general in July 1963 and appointed Chief, Combined Armed Division and then Deputy Director of the Office of Personnel. He served in this role until July 1965 when he was named Assistant Deputy Commanding General, U.S. Army Vietnam (August 1965-December 1965) and then served as Deputy Chief of Staff, U.S. Army, Vietnam (January 1966-March 1966) and Chief of Staff, U.S. Army, Vietnam (April 1966-April 1967).​
​
In March 1967, Seitz was promoted to major general and a month later assumed command of the 82nd Airborne Division at Ft. Bragg. The General spent about a year and a half as commanding general but it was an eventful time in the history of the Airborne and the United States. In July 1967, a brigade from the Division was called to help quell rioting in Detroit. In February 1968, following the Tet Offensive, with less than 36 hours notice the Division deployed its 3rd brigade (the famed 505th Parachute Infantry Regiment) to Vietnam.[9] In late 1968, two brigades from the Division were called out to put down rioting in Washington, DC after the assassination of Rev. Martin Luther King with General Seitz personally commanding the effort.[10] Seitz is credited for making the Division's distinctive maroon beret an accepted portion of its uniform.[11]​
​
In October 1968, General Seitz became Chairman, U.S. Delegation of Joint Brazil-US Military Commission. He held this position until July 1970 when he became Assistant Deputy Chief of Staff for Personnel. In May of 1973, he was promoted to Lt. General. His final assignment returned him to the Airborne as the commanding general of the XVIII Airborne Corps and Ft. Bragg. He retired from active duty in 1975.​
​
awards​
D.S.M. with 2 olc,Silver Star,Legion of Merit with olc,Bronze Star with 2 olc,Air Medal​
​
married Betty Merrill 23.6.1945 Joigny,France (4 children)​
married Virginia L. 12.1.1980​ 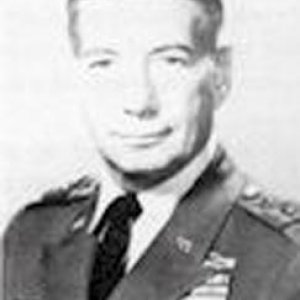