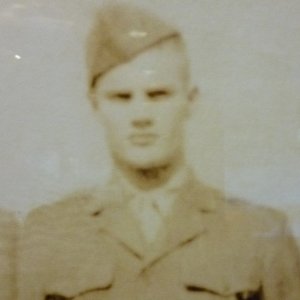 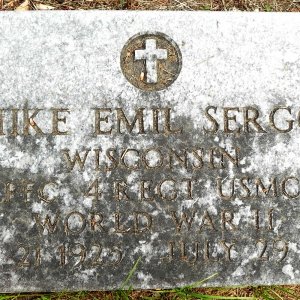 Navy Cross : The President of the United States of America takes pride in presenting the Navy Cross (Posthumously) to Private First Class Mike E. Sergo (MCSN: 507188), United States Marine Corps Reserve, for extraordinary heroism while with the First Battalion, Fourth Marines (Reinforced), First Provisional Marine Brigade, in action against enemy Japanese forces at Guam, Marianas Islands, on 21 July 1944. With several members of his squad seriously wounded during the initial landing on the heavily-fortified beach, Private First Class Sergo promptly assumed command of a group of men and, voluntarily exposing himself to intense hostile small arms, machine-gun and mortar fire, cleared the area of the enemy by skillful use of his rifle and gallantly led his squad to an inland position. Ordered to move his men forward across an open field, he was immediately attacked by the Japanese but, instead of seeking cover, boldly advanced toward the enemy and opened fire, killing some, silencing their machine gun and forcing the others to withdraw, thereby enabling his command to advance with no further casualties. By his brilliant leadership, his daring initiative and dauntless courage in the face of extreme peril, Private First Class Sergo contributed essentially to the success of our forces in taking the initial beachhead and to our ultimate occupation of this strategic island. His valiant devotion to duty throughout was in keeping with the highest traditions of the United States Naval Service.