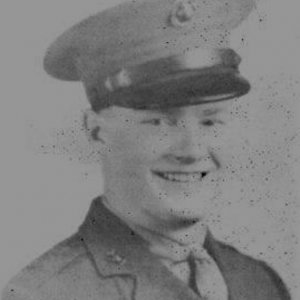 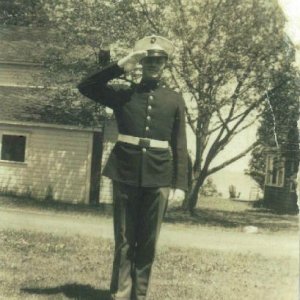 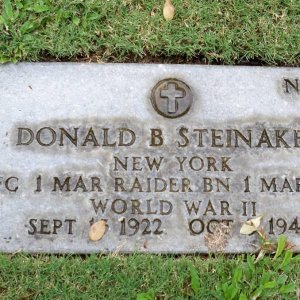 Navy Cross : The President of the United States takes pride in presenting the Navy Cross (Posthumously) to Donald B. Steinaker (305240), Private First Class, U.S. Marine Corps (Reserve), for extraordinary heroism and devotion to duty while serving with Company A, FIRST Marine Raider Battalion in action against enemy Japanese forces near the Matanikau River on Guadalcanal, Solomon Islands, on 8 - 9 October 8 - 9, 1942. When his battalion moved into a defensive position along the Matanikau River, Private First Class Steinaker and other members of his platoon bore the brunt of the heavy enemy assault against their hastily prepared positions. Approximately 150 Japanese, stealing through the dense jungle growth under cover of smoke, fiercely attacked the small group of Marines with automatic weapons, hand grenades, and bayonets. Fighting desperately in hand-to-hand combat against the overwhelming hostile forces, Private First Class Steinaker refused to be dislodged from his position and, after exacting a tremendous toll of the enemy, heroically died at his post. His indomitable fighting spirit and unyielding devotion to duty were in keeping with the highest traditions of the United States Naval Service. Private First Class Steinaker gallantly gave his life for his country.