Eight Lives Down
By Chris Hunter 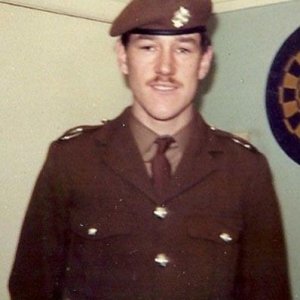 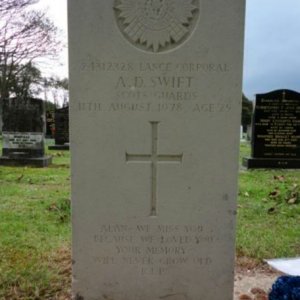 In 2 days it will be 35 years since we lost Alan. Alan was my moms cousin, he had 3 older sisters. I have this photo of him from about a year before he was killed, I didn't see him very often (I was 15 when he was killed). I would have loved to have known him better and later on I would listen to my Uncle John (Alan's dad) talking about him, he didnt talk very often about him, Uncle John and Auntie Frances I dont think ever got over his death but on occasion there would be something that would come up and I would hear a little more about him. I travelled around a lot over the years but since moving back to Liverpool I try and go visit his grave in Ainsdale now and then, its only 2 back from Uncle John and Auntie Francis so they will all be getting a visit on Sunday.

I remember when my mom told me that 'our Alan' had been killed in Northern Ireland, I cried, we all cried, mom said we couldnt go to the funeral as 'funerals werent for kids', but being the stroppy teenager that I was, I kicked off, she gave in and I went with her. The funeral service was heartbreaking, it seemed as though the whole of Formby came to a standstill with people lining the streets from The Swift family home to the church and then on the road out of Formby taking Alan to his final resting place. They played The Last Post.

We went back to The Swift family home for Alan's wake. Uncle John told us then what had happened. Alan had come home the weekend before he was killed, he was in civvy clothes, his hair had grown and he was unshaven, both Uncle John and Auntie Frances knew instantly that something was wrong but they put it down to 'woman trouble' as Alan wouldn't tell them why his appearance was as it was, any other time he came home he was always in uniform and clean shaven (apart from his 'muzzy'), Alan told them there was nothing to worry about and that he was temporarily doing an office job so didn't have to wear his uniform, they were still concerned though...something wasn't right.

Shortly after Alan left his home 'to go back to London', Uncle John and Auntie Frances had a visitor, a military visitor. Alan had been in Northern Ireland, he was sitting in a Datsun (I remember that because my mom had a yellow Datsun at the time and Uncle John hated the car) and the IRA opened fire on him, they didnt know how many bullets he had taken, they said they stopped counting.

Anyways, here is a photo of Alan, taken about 1977. Gone but never forgotten xx

Jackie, I was on the ground in Derry that day and was in the room next to Alan. It was not a Datsun but a light blue Vauxhall VX 490. I know this because the car and a Triumph 2.5 were delivered together and we threw a coin who got what.

A brave man a sad loss and a mate.

As a regular visitor to the Ainsdale area, I recently visited the grave of Lance Corporal Swift in St Mary's Cemetery. Unfortunately, the Cemetery does not have a layout plan, and the Gate Lodge is often unattended, making it difficult to locate graves within the Cemetery especially as the Rows are more like sections. In the event that someone is wishing to locate Lance Corporal Swift's grave, it is better to enter the Cemetery at the Gate Lodge and Row H is located immediately to your right on a slight incline. Follow the path with the perimeter wall to your right for approximately 20 yards, and Lance Corporal Swift's grave will be the Military Headstone on your left. This will minimise the location difficulties which occur if entry to the Cemetery is done from the Church car park. May he rest in peace.
Share:
Facebook Twitter Reddit Pinterest Tumblr WhatsApp Email Share Link
Top