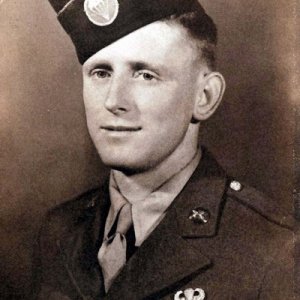 I was a GI baby born in January 1945. My mother told me that my father was an American service man, but would not tell me his name. My mother died recently and I was given a very old document that stated my birth name as Gary Thomas, which was changed a year later by my English father who adopted me in February of 1946.
Since having this document I have discovered a Thomas, Richard H, service number 15335096, who was with the 508 PIR and was based at Wollaton Hall in Nottingham in 1944. In the extended personal notes, a relative has written that he was engaged to be married to an English girl. This is where I need help in confirming whether this is in fact was my real father.
I am thinking, that as he had announced his engagement, he would have told someone in the family of his finance’s name. Do you know if there is a document supporting this, or anyone I could contact to confirm this?

Thank you in advance for any information you may be able to give,