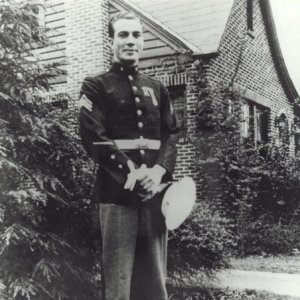 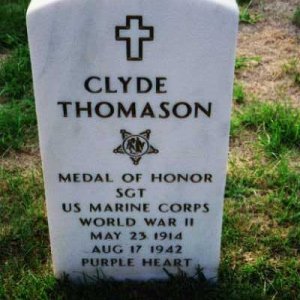 Medal Of Honor : The President of the United States of America, in the name of Congress, takes pride in presenting the Medal of Honor (Posthumously) to Sergeant Clyde A. Thomason (MCSN: 246433), United States Marine Corps Reserve, for conspicuous heroism and intrepidity above and beyond the call of duty during the Marine Raider Expedition by the SECOND Marine Raider Battalion against the Japanese-held island of Makin in the Gilbert Islands on 17 and 18 August 1942. Leading the advance element of the assault echelon, Sergeant Thomason disposed his men with keen judgment and discrimination and, by his exemplary leadership and great personal valor, exhorted them to like fearless efforts. On one occasion, he dauntlessly walked up to a house which concealed an enemy Japanese sniper, forced in the door and shot the man before he could resist. Later in the action, while leading an assault on an enemy position, he gallantly gave his life in the service of his country. His courage and loyal devotion to duty in the face of grave peril were in keeping with the finest traditions of the U.S. Naval Service. He gallantly gave his life for his country.