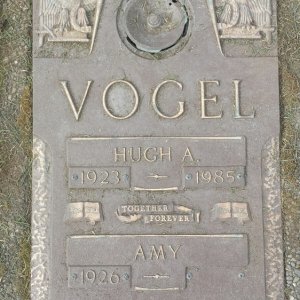 Navy Cross : The President of the United States of America takes pleasure in presenting the Navy Cross to Corporal Hugh A. Vogel (MCSN: 819474), United States Marine Corps, for extraordinary heroism and devotion to duty while serving as a Reconnaissance Non-Commissioned Officer in a Platoon of Weapons Company, Fourth Marines, SIXTH Marine Division, in action against enemy Japanese forces during the assault on Okinawa, Ryukyu Islands, 20 May 1945. Assigned the mission of observing enemy fire in order to direct the fire of his own platoon, Corporal Vogel coolly advanced beyond the front lines to gain better observation despite heavy hostile machine-gun and mortar fire. Coming upon a Japanese dual-purpose 13-mm. weapon, he quickly annihilated the crew, captured the gun and turned it upon the enemy, destroying a mortar position and killing all the members of the mortar crew. After the successful completion of this mission, he bravely proceeded to attack two enemy-held caves during the hours of darkness and successfully destroyed these two positions and their occupants with demolition charges. His outstanding courage, gallant initiative and devotion to duty reflect the highest credit upon Corporal Vogel and the United States Naval Service.