A Special Kind of Courage: Bomb Disposal and the Inside Story of 321 EOD Squadron
By Chris Ryder 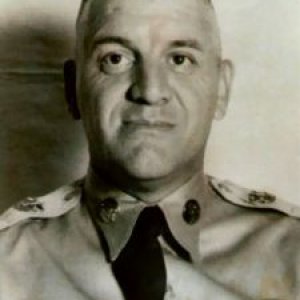 ​
Gabriel Alamo entered the military before World War II and served with the 82d Airborne Division during the war. After the war's end he completed a variety of military courses, finishing the Chemical Corps School in 1950, following which he served in the Korean War. He did overseas tours in occupied Germany and Japan, and eventually volunteered for and qualified in the Special Forces. In 1964, Master Sergeant Alamo volunteered for duty in Vietnam, arriving in late spring. He was assigned to Detachment A-726, based in Nam Dong, South Vietnam, under the Command of Captain Roger Donlon. He was one of two men to earn the Distinguished Service Cross for the July 6, 1964, defense of Nam Dong (both Posthumous awards), that earned Donlon the FIRST Medal of Honor of the Vietnam War. At the time of his death in Vietnam, Gabriel Alamo's wife was pregnant. Upon receiving news of her husband's sacrifice, she miscarried.​

Distinguished Service Cross : The President of the United States of America, authorized by Act of Congress, July 9, 1918 (amended by act of July 25, 1963), takes pride in presenting the Distinguished Service Cross (Posthumously) to Master Sergeant Gabriel Ralph Alamo (ASN: 12008459), United States Army, for extraordinary heroism in connection with military operations involving an opposing armed force in the Republic of Viet Nam on 6 July 1964. As a team Sergeant, serving with the United States Army Special Forces Detachment A-726 at Camp Nam Dong, Sergeant Alamo displayed bravery, fortitude, and perseverance when a reinforced Viet Cong battalion suddenly launched a full scale, pre dawn attack on the Camp. During the violent battle that ensued, lasting five hours and resulting in heavy casualties on both sides, he participated with outstanding effectiveness in defending the installation. Upon the initial onslaught, he promptly directed a radio operator to transmit a message requesting support, and then rushed into a blazing building to assist in the removal of weapons and ammunition. Ignoring the burns he received while in the burning structure, he then ran through a hail of enemy gunfire to a 60-mm. mortar position and set the weapon for firing. As he noticed the enemy attempting to breach the main gate, he again dashed through a heavy volume of automatic weapons fire to abort the hostile action. Although he sustained a serious wound in this courageous action, he demonstrated superhuman effort, reached the gate, and prevented entry of enemy troops. Despite his wound, and intense grenade attack, he reached the 60-mm. mortar pit, refused evacuation for medical treatment, ad directed the fire of the 60-mm. mortar while simultaneously manning a 57-mm. recoilless rifle. Undaunted by the vicious enemy assault, he remained at his battle position and defended the camp until mortally wounded by the enemy. Sergeant Alamo's valiant efforts and extraordinary heroic actions are in the highest traditions of the United States Army and reflect great credit upon himself and the military service.