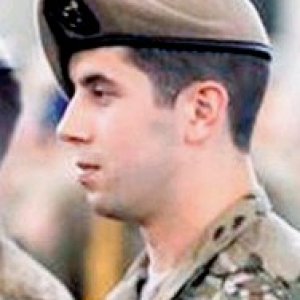 Silver Star : The President of the United States of America, authorized by Act of Congress July 9, 1918 (amended by an act of July 25, 1963), takes pleasure in presenting the Silver Star to Sergeant Derek J. Anderson, United States Army, for gallantry in action as a Ranger Fire Team Leader in Company B, 1st Battalion, 75th Ranger Regiment,, for a Joint Task Force in support of Operation ENDURING FREEDOM in Afghanistan, on 2 December 2014. During this period, Sergeant Anderson maneuvered on multiple enemy fighting positions over a sustained six hour direct fire engagement, resulting in over 25 enemy combatants killed. With no regard to personal safety, Sergeant Anderson placed himself in direct fire and imminent danger in order to move a wounded Ranger behind cover. Sergeant Anderson undoubtedly saved the lives of numerous Rangers and directly contributed to the success of the Joint Task Force. Through his distinctive accomplishments, Sergeant Anderson reflected great credit upon himself, this Command, and the United States Army.

NARRATIVE TO ACCOMPANY AWARD: Sergeant Derek J. Anderson distinguished himself through conspicuous gallantry and intrepidity on 2 December 2014 as a Ranger Fire Team Leader while deployed to Afghanistan in support of Operation ENDURING FREEDOM. On 2 December 2014, Sergeant Anderson was a Ranger Fire Team Leader for a Joint Task Force tasked with executing an objective in Nangahar Province, Afghanistan. After execution of the first targeted compound, the Assault Force (AF) moved to clear an assessed media center approximately two kilometers away. During movement to the follow on objective, two enemy combatants two armed with ATK-47's maneuvered through the wood line on the left flank of the lead element. Sergeant Anderson was within near ambush range when one enemy combatant took aim at the pointman with intent on engaging the Assault Force. When the enemy combatant "charged" his weapon system, Sergeant Anderson instinctively maneuvered to a point of tactical advantage with zero regard for personal safety and accurately engaged one of the two enemy combatants. Sergeant Anderson continued to fire on the remaining enemy who then took cover in a ditch while engaging the Assault Force. He then ordered Corporal Doffing and Private First Class Fausey to continue suppressing the ditch as Staff Sergeant Jones and Sergeant Dunn maneuvered to cover as they were exposed to enemy fire. Upon reaching cover, Staff Sergeant Jones employed a hand grenade on the enemy fighting position as they continued to engage the Assault Force. Knowing the risk of enemy fire involved, Sergeant Anderson exposed himself yet again in order to precisely fix the enemy's position with direct fire until the hand grenade detonated. Sergeant Anderson's direct actions during this near ambush resulted in two EKIAs and the safe passage of the assault force through fortified enemy positions. While executing an objective, Sergeant Anderson was tasked with isolating the follow-on targeted compound from enemy influence. When the callout began, six enemy personnel left a neighboring compound and moved west along the southern wall towards the Assault Force. Sergeant Anderson, along with Sergeant Dunn, engaged the enemy before they had a chance to affect the Assault Force, resulting in five EKIAs. The remaining combatant immediately began fleeing to the east and was engaged by Rotary Wing Close Air Support (CAS). During the call out of the follow-on objective, three barricaded fighters inside the target compound engaged the roof top security team with small arms and fragmentation grenades. Sergeant Dunn and Sergeant Anderson moved to the southwest breach of the compound to engage the enemy with Sergeant Dunn's M-320 grenade launcher. After shooting a 40-mm. grenade at the compound, Sergeant Dunn was struck by close enemy fire and fell down the embankment into the courtyard of the compound. Willingly and without hesitation or regard for his own personal safety, completely exposing himself to heavy automatic gunfire, Sergeant Anderson ran into the courtyard and grabbed Sergeant Dunn, pulling him back to the breach and eventually to cover for treatment, while Sergeant First Class White and Staff Sergeant Healy suppressed the northern building. Sergeant Anderson's quick and decisive actions saved the life of a fellow Ranger and prevented any other injuries from happening within the targeted compound. Through his distinctive accomplishments, Sergeant Anderson's actions were exceptional and reflect great credit upon himself, his unit, and the Department of Defense.