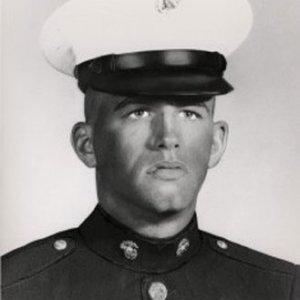 Medal Of Honor : The President of the United States of America, in the name of Congress, takes pride in presenting the Medal of Honor (Posthumously) to Lance Corporal Richard Allen Anderson, United States Marine Corps, for conspicuous gallantry and intrepidity at the risk of his life above and beyond the call of duty on 24 August 1969, while serving as an assistant team leader with Company E, Third Reconnaissance Battalion, THIRD Marine Division (Reinforced), Fleet Marine Force, in connection with combat operations against an armed enemy in Quang Tri Province, Republic of Vietnam. While conducting a patrol during the early morning hours Lance Corporal Anderson's reconnaissance team came under a heavy volume of automatic weapons and machinegun fire from a numerically superior and well concealed enemy force. Although painfully wounded in both legs and knocked to the ground during the initial moments of the fierce fire fight, Lance Corporal Anderson assumed a prone position and continued to deliver intense suppressive fire in an attempt to repulse the attackers. Moments later he was wounded a second time by an enemy soldier who had approached to within eight feet of the team's position. Undaunted, he continued to pour a relentless stream of fire at the assaulting unit, even while a companion was treating his leg wounds. Observing an enemy grenade land between himself and the other Marine, Lance Corporal Anderson immediately rolled over and covered the lethal weapon with his body, absorbing the full effects of the detonation. By his indomitable courage, inspiring initiative, and selfless devotion to duty, Lance Corporal Anderson was instrumental in saving several Marines from serious injury or possible death. His actions were in keeping with the highest traditions of the Marine Corps and of the U.S. Naval Service. He gallantly gave his life in the service of his country.
Last edited by a moderator: Aug 12, 2021