Navy Cross ​
Afghanistan 2001 ​
The President of the United States of America takes pleasure in presenting the Navy Cross to Chief Boatswain's Mate Stephen Bass, United States Navy, for extraordinary heroism as a member of Sea-Air-Land Team ONE (SEAL-1), while serving with the British Special Boat Service during combat operations in Northern Afghanistan on 25 and 26 November 2001. Chief Petty Officer Bass deployed to the area as a member of a Joint American and British Special Forces Rescue Team to locate and recover two missing American citizens, one presumed to be seriously injured or dead, after hard-line Al Qaeda and Taliban prisoners at the Quala-I-Jangi fortress in Mazar-e-Sharif over powered them and gained access to large quantities of arms and ammunition stored at the fortress. Once inside, Chief Petty Officer Bass was engaged continuously by direct small arms fire, indirect mortar fire and rocket propelled grenade fire. He was forced to walk through an active anti-personnel minefield in order to gain entry to the fortress. After establishing the possible location of both American citizens, under heavy fire and without concern for his own personal safety, he made two attempts to rescue the uninjured citizen by crawling toward the fortress interior to reach him. Forced to withdraw due to large volumes of fire falling on his position, he was undeterred. After reporting his efforts to the remaining members of the rescue team, they left and attempted to locate the missing citizen on the outside of the fortress. As darkness began to fall, no attempt was going to be made to locate the other injured American citizen. Chief Petty Officer Bass then took matters into his own hands. Without regard for his own personal safety, he moved forward another 300-400 meters into the heart of the fortress by himself under constant enemy fire in an attempt to locate the injured citizen. Running low on ammunition, he utilized weapons from deceased Afghans to continue his rescue attempt. Upon verifying the condition and location of the American citizen, he withdrew from the fortress. By his outstanding display of decisive leadership, unlimited courage in the face of enemy fire, and utmost devotion to duty, Chief Petty Officer Bass reflected great credit upon himself and upheld the highest traditions of the United States Naval Service. 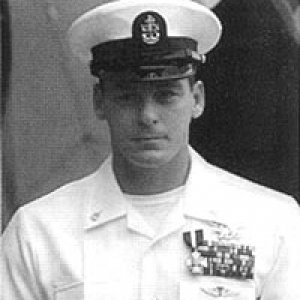