Strike and Hold : A Memoir of the 82d Airborne in World War II
by T. Moffatt Burriss 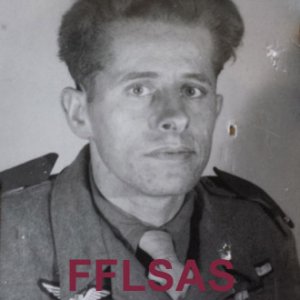 Military Medal : Veteran of the 8th Army, has taken part in operations in Cyrenaica, Libya and Tunis.

Took part in the defence of the BOIS de DAULT on 12 June. On 17 June derailed a train between MUR de BRETAGNE and LOUDEAC; the same day he attacked the observatory dominating the town of ST GUEN, killed two Germans and wounded one. Ordered to work with an FFI unit, he completely organised the area which was given to him. Carried out numerous sabotage tasks and liaison missions in a region strongly occupied by the enemy.

From 4 to 15 August, he directed brilliantly mopping up operations in his sector.

Dropped in HOLLAND on the night 7/8 Apr and was the following day engaged in the hold up at WESTERBOCK of the General Commanding Feldgendarmerie.

Detailed to attack the groups defending the barracks he was able to assemble his men, who had been dispersed by the first German reaction, and killed a General and another high ranking officer. Coming back to the scene of fierce fighting, he attacked the enemy in the rear with gammon bombs and .36 grenades and destroyed the transmitting set.

Seriously wounded, he continued to give orders to his men and to fire till his strength faded out. Gave an example of gallantry and determination.

The Secret Hunters
By Anthony Kemp