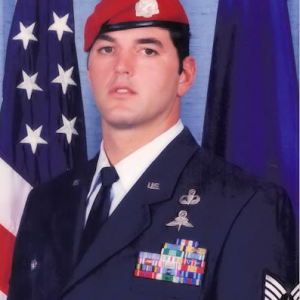 Silver Star : The President of the United States takes pleasure in presenting the Silver Star Medal to Jeffrey Bray, Staff Sergeant, U.S. Air Force, for conspicuous gallantry and intrepidity in connection with military operations against an opposing armed force in Mogadishu, Somalia, from 3 October 1993 to 4 October 1993. On these dates, Staff Sergeant Bray, a 24th Special Tactics Squadron Combat Controller, was attached to a joint service search and rescue security team tasked to respond to the crash of a United States UH-60 helicopter. While serving with a U.S. Army Ranger element trapped and surrounded inside a building in the city, Staff Sergeant Bray coordinated helicopter gunship fire on targets all around his position throughout the night. He developed tactics and techniques on the spot that allowed him to mark friendly forces' locations so that helicopter gunships could destroy close enemy concentrations. By his gallantry and devotion to duty, Staff Sergeant Bray has reflected great credit upon himself and the United States Air Force.
Last edited by a moderator: Jul 9, 2021