Staff member
Bruce ​
Bernard (the Hon.) ​
LRDG G2 Patrol ​
Lieutenant (T/Captain) ​
74477 ​
Military Cross,Mention in Despatches ​
North Africa 1942 ​
parent unit 2 Bn Scots Guards​
resided Dunblane,Perthshire​
born 12.6.1917​
son of Sir Victor Alexander Bruce,13th Earl of Kincardine and Gertrude Lilian (nee Sherbrooke) Bruce​
educated Eton College​
graduated New College,Oxford 1938 (B.A.)​
also held rank of Pilot Officer,R.A.F.V.R.​
joined LRDG October 1942​
married Mary Coxe Miller 19.3.1958 (divorced 1968)​
married Georgina Julia Susan Argenti 5.12.1970 (divorced 1976)​
married Mary Patricia Macdonald 2.7.1976​
died 1983​
​
Bernard Bruce was born in Aberdour, Fife, on 12 June 1917, the son of the Earl of Elgin and Kincardine and Mrs J. A. Stirling of Kippendavie, Perthshire. Educated at Eton and New College, Oxford, he was then employed as an Articled Clerk with a firm of Chartered Accountants. Having gained his pilot's certificate with the Oxford University Air Squadron, he joined the R.A.F. Volunteer Reserve of Officers in 1937. The following year he transferred to the Supplementary Reserve of Officers, Scots Guards. He was commissioned a 2nd Lieutenant in the Scots Guards on 23 February 1938. With the onset of war he was posted to the 2nd Battalion Scots Guards in April 1940 and served in Egypt and Libya. In October 1941 he joined the H.Q. of 13 Corps as G.S.O.III (Liaison) and later as G.S.O.III (Air). He rejoined the 2nd Battalion Scots Guards in July 1942, and in September joined the H.Q. of 30 Corps as A.D.C. In October 1942 he joined the Long Range Desert Group and served as Patrol Commander in Egypt, Libya, Tunisia and Algeria. In August 1943 he joined H.Q. 78 Division and served as G.S.O.III (Operations) in Sicily and Italy. In January 1944 he joined the (Tactical) H.Q. 8th Army and served as G.S.O.II (Operations) in Italy. He returned to England in December 1944. For his wartime services he was mentioned in despatches and awarded the Military Cross. Bruce is mentioned by name as commanding the Guards Patrol L.R.D.G. in Providence their Guide, by David Lloyd Owen. He was released from military service in 1946 with the honorary rank of Major.​
​
M.C. London Gazette 22 April 1943. "In recognition of gallant & distinguished services in the Middle East"​
​
Recommendation states: "Lieut. Bruce commanded a patrol of L.R.D.G. which carried out a recce of the area Bir Dufan-Bir Tala-Beni Ulid before it had been evacuated by the enemy. With a complete disregard of personal safety he spent seven days behind the enemy lines, during which time he collected a vast quantity of information which was of paramount importance to the comds who planned the advance and to those leaders whose task it was to execute the resultant plans. During the actual advance Lieut. Bruce went forward with the advanced elements in order to be in a position from which he could amplify the information he had previously sent in. Lieut. Bruce's bravery was largely responsible for the speed with which this part of the advance was carried out.​
​
M.I.D. London Gazette 15 December 1942. "In recognition of gallant & distinguished services in the Middle East for the period November 1941 to April 1942"​ 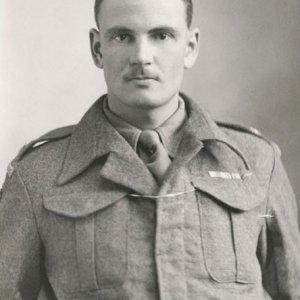