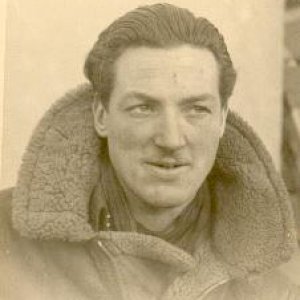 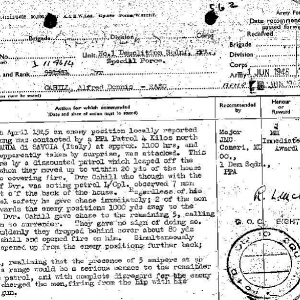 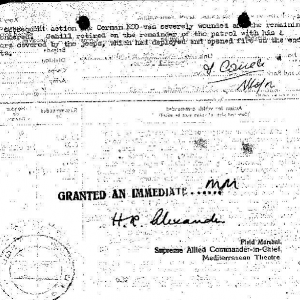 Military Medal : On 26th April 1945 an enemy position locally reported 18 strong was contacted by a PPA Patrol 4 kilos north of Iolanda di Savoia (Italy) at approx. 1100hrs, and being apparently taken by surprise, was attacked. This was done by a dismounted patrol which leaped off the jeeps when they moved to within 20 yds of the house to give covering fire. Dvr Cahill who though with the rank of Dvr. was acting patrol L/Cpl. observed 7 men run out of the back of the house. Regardless of his personal safety he gave chase immediately; 2 of the men ran towards the enemy positions 1000 yds away to the rear; Dvr. Cahill gave chase to the remaining 5, calling on them to surrender. They gave no sign of doing so. Then suddenly they dropped behind cover about 80 yds from Cahill and opened fire on him. Simultaneously 2 MGs opened up from the enemy positions further back;

Cahill, realizing that the presence of 5 snipers at so close a range would be a serious menace to the remainder of the patrol, and with complete disregard for the enemy fire, charged the men, firing from the hip with his tommy gun.

In the subsequent action the German NCO was severely wounded and the remaining 4 surrendered. Cahill retired on the remainder of the patrol with his 4 prisoners covered by the jeeps, which had deployed and opened fire on the enemy MG posts.