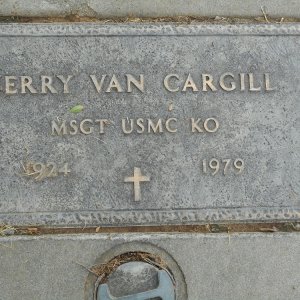 Silver Star : The President of the United States of America takes pleasure in presenting the Silver Star to Corporal Jerry V. Cargill (MCSN: 291833), United States Marine Corps, for conspicuous gallantry and intrepidity while serving with the First Marine Parachute Battalion in action against enemy Japanese forces near Koi-ari, Bougainville, Solomon Islands, on November 29, 1943. Repeatedly exposing himself to intense hostile machine-gun and sniper fire, Corporal Cargill valiantly led his squad in a fierce engagement with numerically superior enemy forces. When one of his men was seriously wounded, he unhesitatingly rushed forward in the face of withering hostile fire and carried his helpless comrade to a safe position where first aid treatment was administered. Corporal Cargill's splendid initiative and unselfish devotion to duty, maintained at great personal risk were in keeping with the highest traditions of the United States Naval Service.