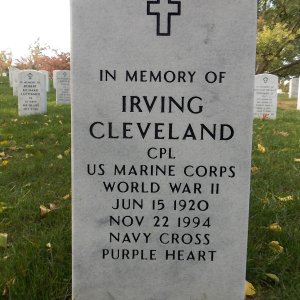 Navy Cross : The President of the United States of America takes pleasure in presenting the Navy Cross to First Lieutenant Irving Cleveland (MCSN: 0-304841), United States Marine Corps Reserve, for extraordinary heroism and devotion to duty while serving with the FIRST Parachute Battalion, FIRST Marine Division, during the assault on enemy Japanese forces at Gavutu, Solomon Islands, on 7 August 1942. With courageous disregard for his own imminent danger, Private First Class Cleveland charged through withering fire to make a lone attack against a strong hostile dugout. After effecting a daring entrance, he engaged the Japanese in perilous hand-to-hand combat and succeeded in killing all of them. His aggressive fighting spirit and valiant devotion to duty were kin keeping with the highest traditions of the United States Naval Service.