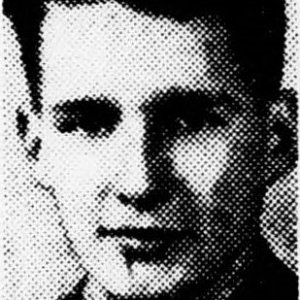 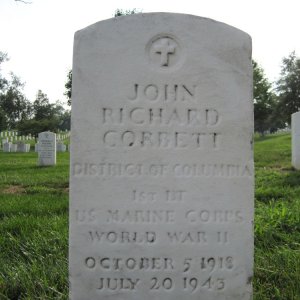 Distinguished Service Cross : The President of the United States of America, authorized by Act of Congress, July 9, 1918, takes pride in presenting the Distinguished Service Cross (Posthumously) to First Lieutenant John R. Corbett (MCSN: 0-78560), United States Marine Corps Reserve, for extraordinary heroism in connection with military operations against an armed enemy while serving with FOURTH Marine Raider Battalion, in the early part of the engagement at Bairoko Harbor, New Georgia, Solomon Islands, on 20 July 1943. Twice-wounded, First Lieutenant Corbett intelligently and courageously maneuvered his platoon in a skillful, steady advance against strong enemy resistance. Ignoring his own safety in the interest of his men and the success of his assigned mission, he heroically continued to direct his platoon's fire until he lost consciousness from a third wound which caused his death. The outstanding heroism and skill displayed by First Lieutenant Corbett on this occasion reflect highest credit upon himself and the Armed Forces of the United States. He gallantly gave his life for his country