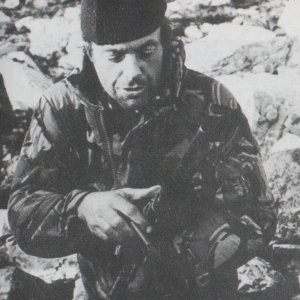 Military Cross : Major Crosland was in command of B Company 2nd Battalion The Parachute Regiment during operations in the Falklands. In the battle for Port Darwin and Goose Green on 28th/29th May 1982 his company was ordered to attack a number of subsidiary positions, and then to capture the high ground overlooking Goose Green. Throughout all the engagements against a vastly numerically stronger enemy he demonstrated remarkable control and steadiness of command, despite the constant artillery, anti-aircraft and small arms fire directed against his men. At every phase of the Battalion's attack he was able to maintain the momentum by his determined leadership and his infectious bravado, which was an inspiration to his soldiers, enabling them to exploit every tactical advantage. Through his clever use of the ground, and by the novel use of anti-tank weapons against enemy bunkers, he was able to secure the critical high ground with the minimum of casualties. The final attack was crucial, enabling an assault to be launched to turn the enemy's flank, which resulted in the collapse of the entire enemy's defence. Again on the night of 13th/14th June 1982 in the attack on Wireless Ridge his unique style of leadership was an inspiration to his soldiers as they attacked through enemy artillery fire. Throughout the campaign Major Crosland has displayed qualities of gallantry and tactical understanding in the very highest tradition of The Parachute Regiment