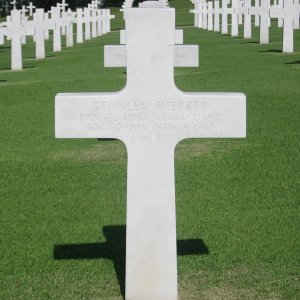 Navy Cross : The President of the United States of America takes pride in presenting the Navy Cross (Posthumously) to Private First Class Stanley Dierker (MCSN: 318056), United States Marine Corps, for extraordinary heroism and conspicuous devotion to duty while serving with Company M, SECOND Marine Raider Battalion, Second Marine Raider Regiment (Provisional), FIFTH Marine Amphibious Corps, during action against enemy Japanese forces along the Numa Numa-Piva Trail, Bougainville, Solomon Islands, on 9 November 1943. Participating with his platoon in the defense of a vital road block on Numa Numa Trail, Private First Class Dierker encountered an overwhelming Japanese force which swept his platoon with machine-gun fire and hand and knee mortar grenades, forcing them to withdraw to a better defensive position. Courageously remaining behind to cover the withdrawal, he retained his firing position in a shallow foxhole and, by cool and deliberate fire, personally accounted for fifteen of the enemy before he himself was killed. By his gallant spirit of self-sacrifice, Private First Class Dierker contributed materially to the successful withdrawal of his platoon which subsequently participated in the utter defeat of the hostile forces in this area. His valiant fighting spirit was in keeping with the highest traditions of the United States Naval Service. He gallantly gave his life for his country.