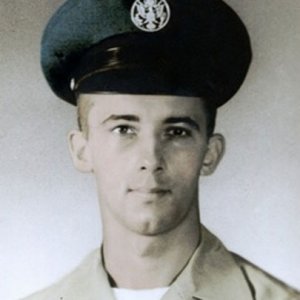 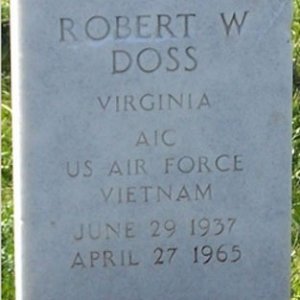 ​
A note from the Virtual Wall​
The U.S. force build-up that began after the Gulf of Tonkin incident placed demands on the USAF Air Rescue Service. The Pacific Air Rescue Center (PARC) did not have the resources to meet these demands, making it necessary to order stateside units to Southeast Asia on a temporary duty basis. On 20 October 1964, PARC Det 4 was activated at Bien Hoa with the first three HH-43F's in Southeast Asia (tail numbers 63-9711, 63-9712, and 63-9716). Airman First Class Robert Doss was a firefighter and rescueman with PARC Det 4.​
​
On 27 April 1965, at 1605 hours, an A-1 Skyraider of the RVNAF 23rd Tactical Wing, fully fueled and laden with Mk82 500-pound bombs, crashed during take-off. A1C Doss and his crew responded immediately. As the rescue crew approached the burning aircraft to rescue the pilot, the ordinance on the aircraft exploded. A1C Doss was struck in the chest by a fragment from the exploding aircraft and was killed. ​