The Trident: The Forging and Reforging of a Navy SEAL Leader
By Jason Redman, John Bruning 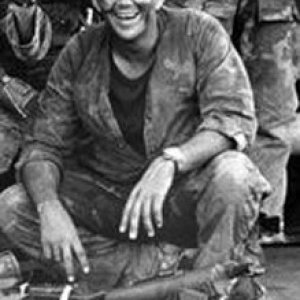 The President of the United States of America takes pleasure in presenting the Navy Cross to Chief Gunner's Mate Barry W. Enoch, United States Navy, for extraordinary heroism on 9 April 1970 in connection with operations against enemy forces in the Republic of Vietnam. While serving with a detachment of Sea-Air-Land Team ONE (SEAL-1), Chief Petty Officer Enoch was the Senior Advisor and radioman/grenadier to a combined United States Vietnamese SEAL combat patrol against the Viet Cong infrastructure leaders in Long Phu District, Ba Xuyen Province. After insertion and patrolling to the target area, Chief Petty Officer Enoch observed six armed Viet Cong attempting to evade. Rushing forward and exposing himself to hostile fire, he succeeded in accounting for three enemy casualties. The SEALs then came under intense B-40 rocket and automatic weapon fire. Realizing that his small force was surrounded, Chief Petty Officer Enoch deployed his men in a defensive perimeter, and although under intense fire, continually shifted position to more effectively employ his weapon, relocate his men, and survey the enemy's locations and tactics. Although his radio was damaged by enemy fire, Chief Petty Officer Enoch directed fixed-wing and helicopter air strikes on the enemy's positions, some strikes as close as twenty meters to his position. With his men running low on ammunition and still encircled, Chief Petty Officer Enoch directed air strikes on the shortest route between his position and the river, and then led the patrol through the enemy encirclement before the latter could close the gap caused by the air strikes. By his heroic and decisive efforts in the face of almost overwhelming odds, Chief Petty Officer Enoch was directly responsible for the safe extraction of the patrol members and upheld the highest traditions of the United States Naval Service.
Last edited by a moderator: Sep 18, 2020