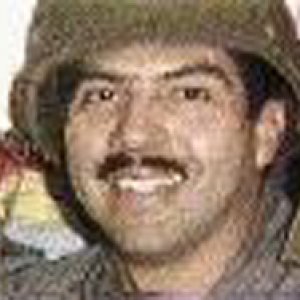 Silver Star : The President of the United States of America, authorized by Act of Congress, July 9, 1918 (amended by act of July 25, 1963), takes pride in presenting the Silver Star (Posthumously) to Captain Arthur Galvan, United States Air Force, for gallantry in connection with military operations against the forces of the Republic of Iraq, while serving as Fire Control Officer of AC-130H Spectre Gunship "Spirit 03", of the 16th Special Operations Squadron, U.S. Air Force Special Operations Command, in action near the Kuwaiti border while supporting U.S. Marine Corps operations during the first Iraq offensive, on 31 January 1991. On that date, while performing an Operation DESERT STORM AC-130H armed reconnaissance mission, Captain Galvan was tasked to engage a free rocket over ground missile site. As the fire control officer, Captain Galvan monitored all weapon systems and upon his confirmation of the target the pilot began firing 40 and 105 millimeter munitions at the missiles. While engaging the target, the aircrew received heavy fire from numerous anti-aircraft artillery fire sites. His courageous and aggressive attack continued while under unceasing anti-aircraft artillery fire preventing a missile attack on allied coalition forces. The actions of Captain Galvan aided the allied forces in repelling the Iraqi Army incursion south into the Saudi Arabia border town of Khafji. The professional competence, aerial skill, and devotion to duty displayed by Captain Galvan in the dedication of this service to his country reflect great credit upon himself and the United States Air Force.