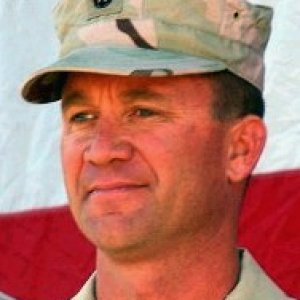 Silver Star : The President of the United States of America takes pleasure in presenting the Silver Star to Senior Chief Special Warfare Operator (SEAL) Jason Gardner, United States Navy, for conspicuous gallantry and intrepidity in action against the enemy while serving as SEAL Team SEVEN Task Unit TRIDENT Senior Enlisted Advisor, in direct support of Operation ENDURING FREEDOM from 9 April to 1 October 2009. Senior Chief Gardner commanded his task unit during a two-day direct action mission in enemy terrain in Northern Kandahar from 16 to 17 July 2009. He led seven positions which were encircled by enemy forces and sustained a barrage of enemy fire from all sides. Senior Chief Gardner fearlessly exposed himself to return fire and coordinated counterattacks, preventing his task unit from being overrun. Although he was shut off from seven observation positions by an enemy machine gunner, he continued to expose himself to spot and direct fire, silencing the automatic weapon which had pinned down his task unit. Senior Chief Gardner's heroic actions inspired his platoons and contributed to 56 enemy killed in action. He fearlessly led his task unit during 357 hours of troops in contact, resulting in 196 enemy killed in action and six high-value individuals captured. By his bold leadership, courageous actions, and total dedication to duty, Senior Chief Gardner reflected great credit upon himself and upheld the highest traditions of the United States Naval Service.

Seal Doc: The Story of the First US Navy Seal Team in Vietnam
By D.R. Davis