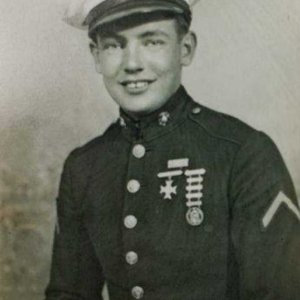 Silver Star : The President of the United States of America takes pleasure in presenting the Silver Star to Private First Class Charles E. Haggett (MCSN: 354566), United States Marine Corps, for conspicuous gallantry and intrepidity in action while serving with the First Parachute Battalion, First Marine Parachute Regiment, First Marine Amphibious Corps during operations against enemy Japanese forces on Bougainville, Solomon Islands on January 1, 1944. Armed with an antitank launcher and grenades during a vigorous assault against hostile units east of the Torokina River, Private First Class Haggett repeatedly exposed himself to heavy hostile machine gun fire and, fighting with forceful determination, succeeded in silencing one of a series of prepared enemy pill boxes before he was wounded by a withering burst from Japanese guns. Private First Class Haggett's daring initiative and unflinching courage in the face of grave peril were in keeping with the highest traditions of the United States Naval Service.