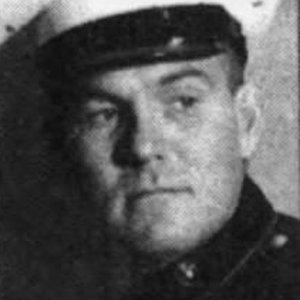 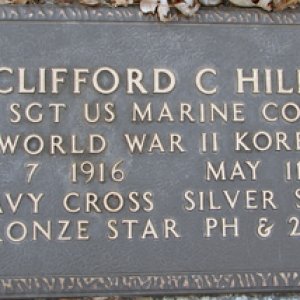 Navy Cross : The President of the United States of America takes pleasure in presenting the Navy Cross to Platoon Sergeant Clifford C. Hills (MCSN: 242400), United States Marine Corps, for extraordinary heroism and devotion to duty while serving with Company A, FIRST Marine Raider Battalion, during the landing assault and seizure of enemy Japanese-held Tulagi Island, British Solomon Islands, on the night of 7 - 8 August 1942. When an enemy Japanese detachment penetrated his battalion and was laying down flanking fire into his company's position, Platoon Sergeant Hills, on his own initiative and at the risk of his life, moved forward to within twenty yards of hostile machine guns, and with his automatic rifle, silenced the guns and destroyed the enemy personnel manning them. His daring and prompt action undoubtedly saved the lives of many of his comrades and materially contributed to thwarting the Japanese counter-attack. His great personal valor and loyalty were in keeping with the highest traditions of the United States Naval Service.

Silver Star : The President of the United States of America takes pleasure in presenting the Silver Star to Platoon Sergeant Clifford C. Hills (MCSN: 242400), United States Marine Corps, for conspicuous gallantry and intrepidity while serving as a Platoon Leader of Company E, Second Battalion, Fifth Marines, FIRST Marine Division in action against enemy Japanese forces on Okinawa, Ryukyu Islands on 11 May 1945. While maneuvering his platoon into position for a flanking attack against a strongly fortified hostile emplacement, Platoon Sergeant Hills braved continuous enemy fire to supervise and aid in the evacuation of two Marines seriously wounded by heavy mortar, machine gun and rifle fire. Although wounded by heavy mortar, machine gun and rifle fire. Although wounded himself while rescuing his comrades, he remained with his platoon and led the successful assault on the objective despite further wound received from the heavy Japanese fire. His courage and devotion to duty and grave concern for the safety of other were in keeping with the highest traditions of the United States Naval Service.