Commando: Memoirs of a Fighting Commando in World War Two
By John Durnford-Slater 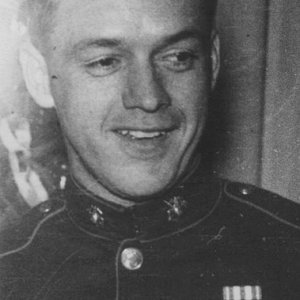 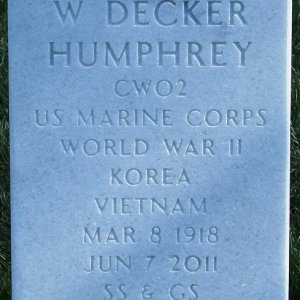 ​
Mr. W. Decker Humphrey, of White Plains, passed away Tuesday June 7, 2011, at Regional Medical Center in Madisonville. ​
​
He was born December March 8th, 1918 in Kansas City, KS to the late Walter Decker Humphrey and Virginia Martin Humphrey. He was also preceded in death by two brothers and three sisters. ​
​
Mr. Humphrey was a mining engineer, retired from the P&M Coal Company and served 23 years in the United States Marine Corps where he was the recipient of two silver stars during action in the Pacific in WWII. ​
​
He is survived by his wife, Ruth "Pat" Carter Humphrey; two daughters, Christine Thorowgood of White Plains and Jan Humphrey of Madisonville; two sons, James Humphrey of Decatur, IL and John Humphrey of Parker, CO; five grandchildren, and two great grandchildren. ​
​
Funeral services will be held at 1:30 P.M on Sunday at St. Mary's Episcopal Church in Madisonville with the Reverend Candyce Loescher officiating. Burial will follow at Arlington National Cemetery at a later date.​

Silver Star : The President of the United States of America takes pleasure in presenting the Silver Star to Private First Class Waldo D. Humphrey (MCSN: 333985), United States Marine Corps Reserve, for conspicuous gallantry and intrepidity as member of a reconnaissance patrol landed by submarine on enemy held Shortland Island, Solomon Islands on 23 August 1943. Voluntarily and with utter disregard of personal safety, Private First Class Humphrey embarked upon an extremely dangerous mission into Japanese occupied territory for the purpose of securing vital information with regard to terrain, hydrographic conditions and strength and disposition of hostile forces. Undeterred by the isolation of his position and by the full knowledge that no assistance could be expected from outside sources, he nevertheless remained on the island for three days, successfully carrying out an important assignment under hazardous conditions where discovery by Japanese troops would undoubtedly have resulted in his capture or death. His courageous devotion to duty was in keeping with the highest traditions of the United States Naval Service.

Silver Star : (Gold Star) The President of the United States of America takes pleasure in presenting a Gold Star in lieu of a Second Award of the Silver Star to Platoon Sergeant Waldo D. Humphrey (MCSN: 333985), United States Marine Corps Reserve, for conspicuous gallantry and intrepidity while serving with Headquarters and Service Company, Ninth Marines, THIRD Marine Division in action against enemy Japanese forces on Iwo Jima, Volcano Islands on 2 March 1945. When a platoon of Japanese troops under attack by his group set off a large store of explosives within their cave, Platoon Sergeant Humphrey braved smoke and flames to move to the edge of the still crumbling cliff and succeeded in rescuing two wounded men, one of whom had been buried by the debris. Quickly accounting for all his men, he began to reorganize the perimeter defense of the command post and, braving small arms fire, led badly shaken but uninjured men to new positions. His courage and devotion to duty reflect the highest credit upon Platoon Sergeant Humphrey and the United States Naval Service.