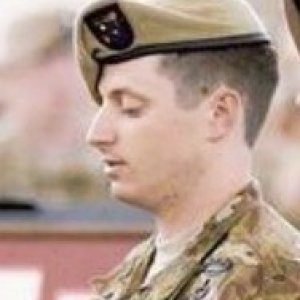 Silver Star : The President of the United States of America, authorized by Act of Congress July 9, 1918 (amended by an act of July 25, 1963), takes pleasure in presenting the Silver Star to Staff Sergeant James B. Jones, United States Army, for gallantry in action as a Ranger Squad Leader in Company B, 1st Battalion, 75th Ranger Regiment,, for a Joint Task Force in support of Operation ENDURING FREEDOM in Afghanistan, on 2 December 2014. During this period, Staff Sergeant Jones maneuvered on multiple enemy fighting positions over a sustained six hour direct fire engagement, resulting in over 25 enemy combatants killed. With no regard to personal safety, Staff Sergeant Jones placed himself in direct fire and imminent danger in order to move a wounded Ranger behind cover. Staff Sergeant Jones undoubtedly saved the lives of numerous Rangers and directly contributed to the success of the Joint Task Force. Through his distinctive accomplishments, Staff Sergeant Jones reflected great credit upon himself, this Command, and the United States Army.

The Battle of Mogadishu
By Matt Eversmann