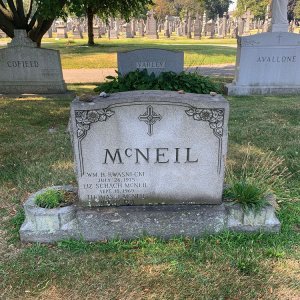 ​
Above "Omaha Beach" on the Normandy coast last June 6 there was a battery of German artillery pouring merciless fire into the ranks of American Infantryman fighting their way ashore. It was of vital importance that the enemy battery by knocked out.​
​
That perilous mission was assigned to Doughboys of the 2d Infantry Ranger Battalion, soldiers schooled in the commando-type fighting used to advantage in the early days of the invasion of France.​
​
How that mission was accomplished was told, in a War Department interview released today, by Corporal William Kwasnicki, 25 of 14 Island Road, Mahwah, New Jersey, a member of the battalion who has returned to the United States on furlough after seven months of action on the Western Front.​
​
"The Jerry battery," said the Ranger, "was located atop a steep cliff, All the approaches to the cliff were covered by enemy machinegun and rifle fire. We knew our job was to scale the cliff and we were determined to do it.​
​
"None of us had the feeling we were doing anything extraordinarily heroic. We landed in France knowing we were certain to get a tough job. Now we had it and we were determined to complete it.​
​
"So we concentrated on doing it. I'll tell you how hard we were concentrating. As I started up the cliff I was hit in the right leg by a machinegun bullet. I didn't even feel pain. I remember looking down and seeing blood on my pants leg and wondering what was causing it.​
​
"Buddies on either side of me were hit. They dropped. I wanted to stop and help them, but I couldn't. I had to get on with my own job. Besides, I knew that the aid men who were right along with us would take care of them.​
​
"Slowly, our outfit went higher and higher up the side of the cliff. A bullet creased my helmet, but I wasn't hurt. I kept going. Finally, we reached the top, scrambled over, and smashed forward to complete the mission.​
​
"We did that with thermite grenades. We pressed on until we were within grenade-throwing distance and then we let the Jerries have it. As the grenades started doing their work, our riflemen opened up and after a savage fight that lasted about 30 minutes the Jerry battery was silenced."​
​
For that mission, Corporal Kwasnicki's unit received a citation, giving him the right to wear the Distinguished Unit Badge. He also holds the Purple Heart with two Oak Leaf Clusters, representing wounds received in battle, and has been awarded the Combat Infantryman Badge for exemplary conduct in action against the enemy.​
​
After the fighting on the beachhead and the cliffs above it, Corporal Kwasnicki and the other Rangers drove inland, eliminating a series of German machinegun positions in the hedgerows which honeycomb the Normandy countryside. Not until June 10, four days after he had been hit, did he report the machinegun bullet wound in his leg. He then was sent to a field hospital and was out of action for 30 days.​
​
The corporal rejoined the Ranger Battalion in time to take part in the vicious fighting for Brest, during which, he recalled, he killed or wounded 11 snipers.​
​
During an attack on an enemy strong point just outside Brest, the Infantryman again was wounded in the left leg, this time by a shell fragment. That wounds took him out of the front lines for 20 days.​
​
Corporal Kwasnicki was wounded for the third time in an attack on Schmidt, Germany, and of that episode he said:​
​
"I remember it vividly not so much because I was hit in the back by shell fragments as I was crawling under barbed wire entanglements, but because it was there that I witnessed one of the bravest acts I ever saw. It was performed by Sergeant Donovan of Pittsburgh, Pennsylvania.​
​
"The Jerries counterattacked in force. They were fighting furiously and it looked bad for us until Donovan took a big hand in the proceedings. He ran to a light machinegun whose gunner had been killed. The gun had been damaged but Donovan, impervious to the aimed fire the enemy was pouring at him, somehow got it in action, and coolly went about the business of mowing Jerries down.​
​
"They kept coming at him, apparently refusing to believe that any Doughboy could stand up under the fire they were throwing at him, and he kept shooting them. It was one of those things that make you marvel at the height of courage to which a man can rise when his buddies' lives depend on it.​
​
"Donovan broke up that counterattack. Leaving more than 20 dead in front of his gun, the Jerries withdrew. Later, we advanced and took prisoners, including some of the Jerries who had been in the counterattack. The first thing they asked for was a look at the Dougboy who manned that machinegun. They called Donovan an 'iron man'."​
​
Corporal Kwasnicki, the son of Mr. and Mrs. Victor Kwasnicki, expected to return overseas after spending a furlough in Mahwah with his parents. He has been in the Army 26 months. He received his basic training with the 100th Infantry Division at Camp Forrest, Tennessee, and volunteered for service as an Infantry Ranger.​
​
Source : US War Department Press Release ​
https://www.ancestry.co.uk/search/collections/3026
​
​